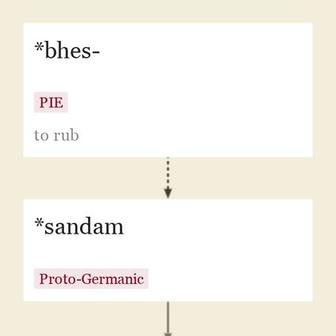 Historically, the line between sand and gravel cannot be distinctly drawn. Used figuratively in Old English in reference to innumerability and instability. General Germanic, but not attested in Gothic, which used in this sense malma, related to Old High German melm "dust," the first element of the Swedish city name Malmö (the second element meaning "island"), and to Latin molere "to grind."

Metaphoric for innumerability since Old English. In compounds, often indicating "of the shore, found on sandy beaches." In old U.S. colloquial use, "grit, endurance, pluck" (1867), especially in have sand in (one's) craw. Sands "tract or region composed of sand," is by mid-15c.