late 14c., "contemptuous, arrogant, showing haughty disregard of others," from Latin insolentem (nominative insolens) "arrogant, immoderate," also "unaccustomed, unwonted," literally "unusual, unfamiliar," from in- "not, opposite of" (see in- (1)) + solentem, present participle of solere "be accustomed, be used to; cohabit with," from Proto-Italic *sol-e-.

This is of uncertain origin. An old guess connects it to the source of Latin sodalis "close companion," and suescere "become used to," but de Vaan rejects this on phonetic grounds. Another guess connects it to the source of Latin solum "ground," with a possible sense shift from "inhabit" to "be accustomed to." Or it might be from PIE root *sel- (1) "human settlement" (source also of Old Church Slavonic selo "courtyard, village," Russian selo "village," Old English sele, Old High German sal "hall, house"). Meaning "contemptuous of rightful authority" is from 1670s. Related: Insolently.

Insolent is now chiefly used of language that is intentionally and grossly rude, defiant, or rebellious. Where it applies to conduct, the conduct includes language as the most offensive thing. [Century Dictionary, 1902] 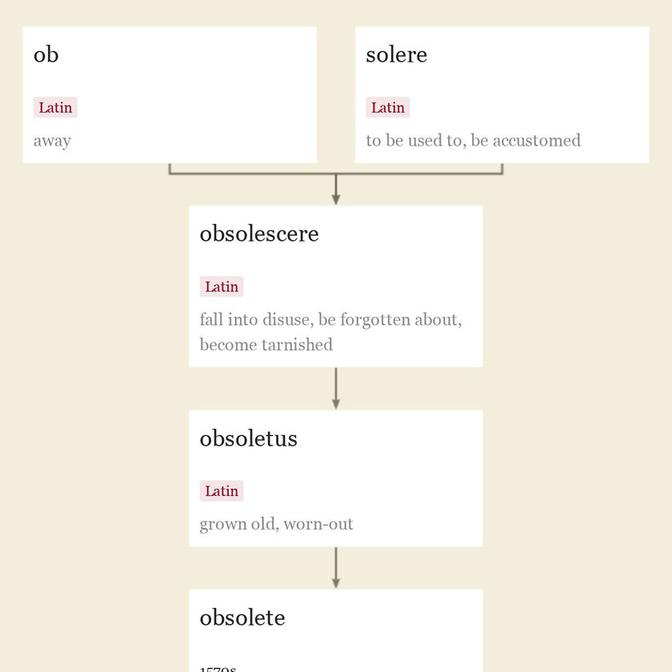 "that is no longer practiced or used, out of date, gone out of use, of a discarded type," 1570s, from Latin obsoletus "grown old, worn-out," past participle of obsolescere "fall into disuse, be forgotten about, become tarnished," which probably is from ob "away" (see ob-) + an expanded form of solere "to be used to, be accustomed" (see insolent).