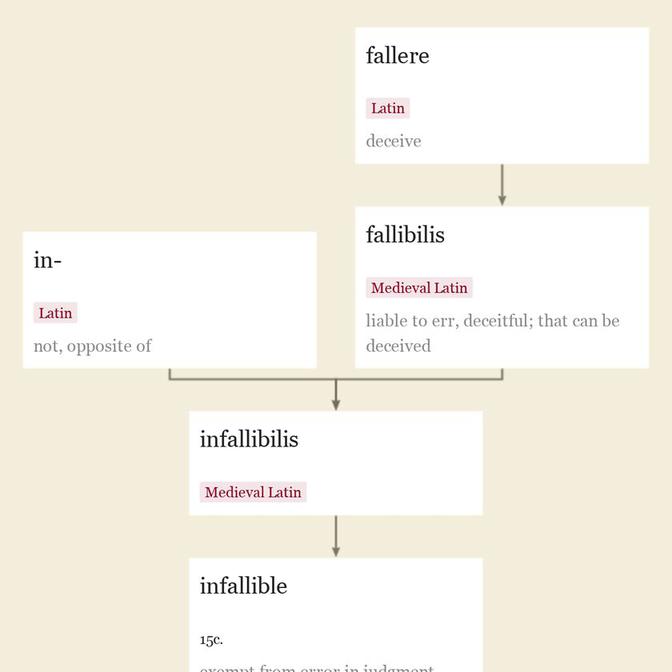 "exempt from error in judgment, knowledge, or opinion," early 15c., from Medieval Latin infallibilis, from in- "not, opposite of" (see in- (1)) + Late Latin fallibilis (see fallible). In reference to Popes, attested from 1870, hence infallibilism, the doctrine of this; infallibilist. Related: Infallibly.
Related entries & more
Advertisement
infallibility (n.)
"quality of being incapable of error," 1610s, from Medieval Latin infallibilitas, from infallibilis (see infallible).
Related entries & more
anti-macassar (n.)
also antimacassar, 1848, from anti- + macassar oil, supposedly imported from the district of Macassar on the Indonesian island of Sulawesi, which was commercially advertised from 1809 as a men's hair tonic "infallible in promoting an abundant growth and in maintaining the early hue and lustre of the HAIR to the extent of human life" [1830]. The cloth was laid to protect chair and sofa fabric from men leaning their oily heads back against it.
Related entries & more
mountebank (n.)

"peripatetic quack; one who sells nostrums at fairs, etc.," in Johnson's words, "a doctor that mounts a bench in the market, and boasts his infallible remedies and cures;" 1570s, from Italian montambanco, contraction of monta in banco "quack, juggler," literally "mount on bench" (to be seen by crowd), from monta, imperative of montare "to mount" (see mount (v.)) + banco, variant of banca "bench," from a Germanic source (see bench (n.)). Figurative and extended senses, in reference to any impudent pretender or charlatan, are from 1580s. Related: Mountebankery.

also Sanscrit, ancient sacred language of India, 1610s, from Sanskrit samskrtam "put together, well-formed, perfected," neuter of samskrta, from sam "together" (from PIE root *sem- (1) "one; as one, together with") + krta- "to make, do, perform" (from PIE *kwer- "to make, form;" see terato-). "[S]o called as being the cultivated or literary language, distinguished from the vulgar dialects, or, some say, because regarded as a perfect language, the speech of the gods, formed by infallible rules" [Century Dictionary]. It continued as a learned tongue long after it ceased to exist as a vernacular.

THE baseball season has opened, and along with the twittering of the birds, the budding of the trees, and the clattering of the truck, comes the news that the "Mets were beaten yesterday 17 to 5." It is an infallible sign of spring when the Mets are beaten 17 to 5, and we invariably put on our thinner clothing when we read that refreshing, though perennial news in the papers. [Life magazine, May 12, 1887]