1961, "comedy that deals in themes and subjects usually regarded as serious or taboo," from black (adj.), in a figurative sense of "morbid," + comedy. Compare French pièce noire, also comédie noire "macabre or farcical rendering of a violent or tragic theme" (1958, perhaps the inspiration for the English term) and 19th-century gallows-humor. In a racial sense, from 1921.

It is the hypothetical source of/evidence for its existence is provided by: Sanskrit sastra- "knife, dagger;" Greek keazein "to split;" Latin carere "to be cut off from," cassus "empty, void;" Old Church Slavonic kosa "scythe."
Related entries & more
Advertisement
Jap (n.)
colloquial abbreviation of Japanese, 1877, perhaps encouraged or inspired by the common abbreviation Jap.; it was not originally pejorative, but it became intensely so during World War II. It was protested by Japanese before the war, but did not begin to be taboo in the U.S. before 1960s. As an adjective from 1878. For some years after World War II in American English the word also functioned as a verb, "to execute a sneak attack upon," a reference to Pearl Harbor.
Related entries & more
minnesinger (n.) 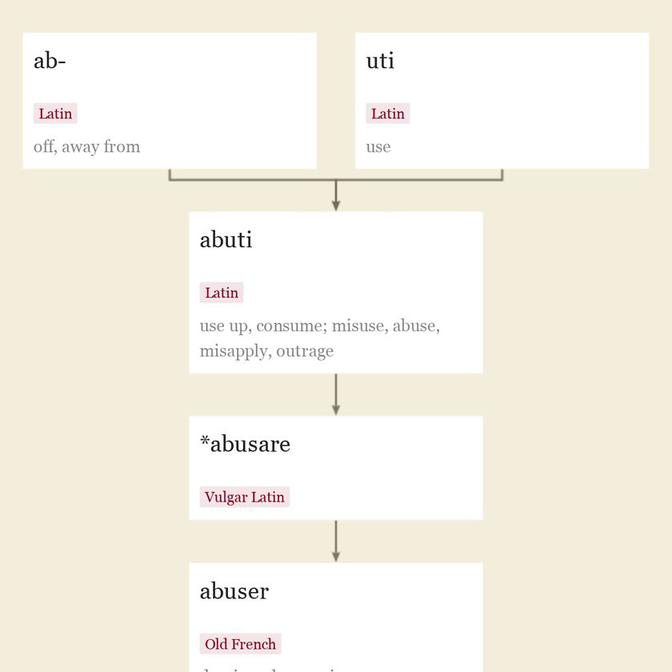 'Homosexual' is a barbarously hybrid word, and I claim no responsibility for it. It is, however, convenient, and now widely used. 'Homogenic' has been suggested as a substitute. [H. Havelock Ellis, "Studies in Psychology," 1897]

Sexual inversion (1883, later simply inversion, by 1895) was an earlier clinical term for "homosexuality" in English, said by Ellis to have originated in Italian psychology writing. See also uranian. Unnatural love was used 18c.-19c. for homosexuality as well as pederasty and incest. In 17c.-18c., pathic was used as a noun and adjective in reference to a man that submits to sexual intercourse with another man. Related: Homosexually.

"word used to qualify, limit, or define a noun or noun-like part of speech," late 14c., short for noun adjective, from Old French adjectif (14c.), from Latin adjectivum "that is added to (the noun)," neuter of adjectivus "added," past participle of adicere "throw to, fling at, throw or place (a thing) near," especially "add in addition, add by way of increase," from ad "to" (see ad-) + combining form of iacere "to throw" (from PIE root *ye- "to throw, impel"). In Britain from at least 1851 the word often was a euphemism for the taboo adjective bloody.

They ... slept until it was cool enough to go out with their 'Towny,' whose vocabulary contained less than six hundred words, and the Adjective. [Kipling, "Soldiers Three," 1888]