Advertisement
all
word
name
phrase
suffix
prefix
word root
28 entries found.
impulse (n.)
early 15c., "an act of impelling, a thrust, push," from Latin impulsus "a push against, pressure, shock," figuratively "incitement, instigation," past participle of impellere "to strike against, push against," from assimilated form of in- "into, in, on, upon" (from PIE root *en "in") + pellere "to push, drive" (from PIE root *pel- (5) "to thrust, strike, drive"). Meaning "a stimulus in the mind to action, arising from some state or feeling" is first recorded 1640s. As an adjective, in reference to purchases made on impulse, 1955 (in impulse buyer).
Related entries & more
Advertisement
impulsive (adj.)

It is the hypothetical source of/evidence for its existence is provided by: Greek pallein "to wield, brandish, swing," pelemizein "to shake, cause to tremble;" Latin pellere "to push, drive;" Old Church Slavonic plŭstĭ.
Related entries & more
neurotransmitter (n.)

"chemical substance which transmits an impulse from one nerve fiber to another or others," 1959, from neuro- + transmitter.

"with sudden energy or impulse," 1801, from Italian sforzando, present participle of sforza "to force," from Vulgar Latin *exfortiare "to show strength" (see effort).

"of, pertaining to, characterized by, or affected with pyromania," 1855, from pyromania. As a noun from 1861, "person possessed of an irresistible impulse to burn things." Related: Pyromaniacal.

motion or impulse given beforehand," "1640s, from Medieval Latin praemotionem (nominative praemotio), noun of action from past-participle stem of Late Latin praemovere, from prae "before" (see pre-) + movere "to move" (from PIE root *meue- "to push away").

1690s in the scientific use in mechanics, "product of the mass and velocity of a body; quantity of motion of a moving body," from Latin momentum "movement, moving power" (see moment). Figurative use, "force gained by movement, an impulse, impelling force," dates from 1782. 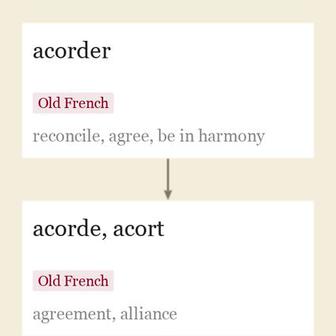 late 13c., "agreement, harmony of opinions," accourd, acord, from Old French acorde, acort "agreement, alliance," a back-formation from acorder "reconcile, agree, be in harmony" (see accord (v.)). Meaning "will, voluntary impulse or act" (as in of one's own accord) is from mid-15c.
Related entries & more
Next
Advertisement