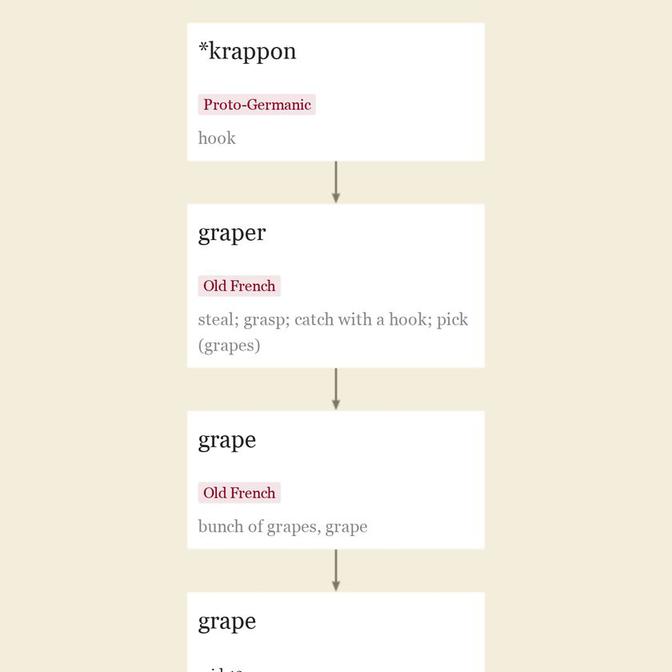 mid-13c., "a grape, a berry of the vine," also collective singular, from Old French grape "bunch of grapes, grape" (12c.), probably a back-formation from graper "steal; grasp; catch with a hook; pick (grapes)," from a Frankish or other Germanic word, from Proto-Germanic *krappon "hook," from a group of Germanic words meaning "bent, crooked, hooked" (cognates: Middle Dutch crappe, Old High German krapfo "hook;" also see cramp (n.2)). The original notion thus perhaps was "vine hook for grape-picking." The vine is not native to England. The word replaced Old English winberige "wine berry." Spanish grapa, Italian grappa also are from Germanic.
Related entries & more
Advertisement
grappa (n.)
"brandy distilled from the residue of wine-making," 1893, from Italian grappa, literally "grapes" (see grape).
Related entries & more
grapnel (n.)
"small hook," especially one fixed on a rope and thrown for seizing and holding, late 14c., grapenel, from an assumed Anglo-French diminutive of grapon, from Old French grapil, grapin "hook," diminutive of grape "hook" (see grape). Earlier form was grapel (compare grapple (n.)).
Related entries & more
grapefruit (n.)
1814, from grape + fruit. Said to have been so called for its taste, or perhaps because it grows in clusters. Perhaps a marketing name; it was known by various names (pomelo, shaddock) before the current one emerged. The fruit itself was known since 1693 (in Hans Sloane's catalogue of Jamaican plants); presumably it originated in Jamaica from chance hybrids between other cultivated citrus. An ornamental plant chiefly at first, not much eaten until late 19c.
Related entries & more
grapeshot (n.)

also grape-shot, 1747, from grape + shot (n.). So called for its appearance. Originally simply grape (1680s), a collective singular. The whiff of grapeshot was popularized in English from 1837, from Carlyle's history of the French Revolution (in which book it was a chapter title). It seems to be his.

The Nobles of France, valorous, chivalrous as of old, will rally round us with one heart;—and as for this which you call Third Estate, and which we call canaille of unwashed Sansculottes, of Patelins, Scribblers, factious Spouters,—brave Broglie, "with a whiff of grapeshot (salve de canons)," if need be, will give quick account of it. [Carlyle, "French Revolution"]

also grape-vine, 1736, from grape + vine. Meaning "a rumor; a secret or unconventional method of spreading information" (1863) is from the use of grapevine telegraph as "secret source of information and rumor" in the American Civil War; in reference to Southerners under northern occupation but also in reference to black communities and runaway slaves.

The false reports touching rebel movements, which incessantly circulated in Nashville, brings us to the consideration of the "grapevine telegraph"—a peculiar institution of rebel generation, devised for the duplex purpose of "firing the Southern heart," and to annoy the "Yankees." It is worthy of attention, as one of the signs of the times, expressing the spirit of lying which war engenders. But it is no more than just to say that there is often so little difference between the "grapevine" and the associated press telegraph, that they might as well be identical. ["Rosecrans' Campaign with the Fourteenth Corps," Cincinnati, 1863]