Forsake is chiefly applied to leaving that by which natural affection or a sense of duty should or might have led us to remain: as, to forsake one's home, friends, country, or cause; a bird forsakes its nest. In the passive it often means left desolate, forlorn. [Century Dictionary]

1640s, "left, abandoned by the owner or guardian," from Latin derelictus "solitary, deserted," past participle of dereliquere "to abandon, forsake, desert," from de- "entirely" (see de-) + relinquere "leave behind, forsake, abandon, give up," from re- "back" (see re-) + linquere "to leave," from PIE root *leikw- "to leave."

Originally especially of vessels abandoned at sea or stranded on shore. Of persons, "unfaithful, neglectful of responsibility," by 1864. As a noun, "property which is abandoned," from 1660s. As "person abandoned or forsaken," 1728.

"remains (as those of fossil organisms)," 1650s, Latin plural of reliquus "remainder, residue," noun use of an adjective meaning "that is left, remaining, left over," a derivative of relinquere (perfective reliqui) "to leave behind, forsake, abandon, give up," from re- "back" (see re-) + linquere "to leave" (from PIE *linkw-, nasalized form of root *leikw- "to leave"). As "literary remains," by 1933.

c. 1400, "abandoned, forsaken," from Latin destitutus "abandoned," past participle of destituere "forsake," from de "away" (see de-) + statuere "put, place," causative of stare "to stand," from PIE root *sta- "to stand, make or be firm." Originally literal; of persons, "forlorn, hopeless," 1510s; sense of "lacking resources, without means, impoverished, indigent" is by 1530s. As a noun, "severely impoverished persons collectively," 1737. 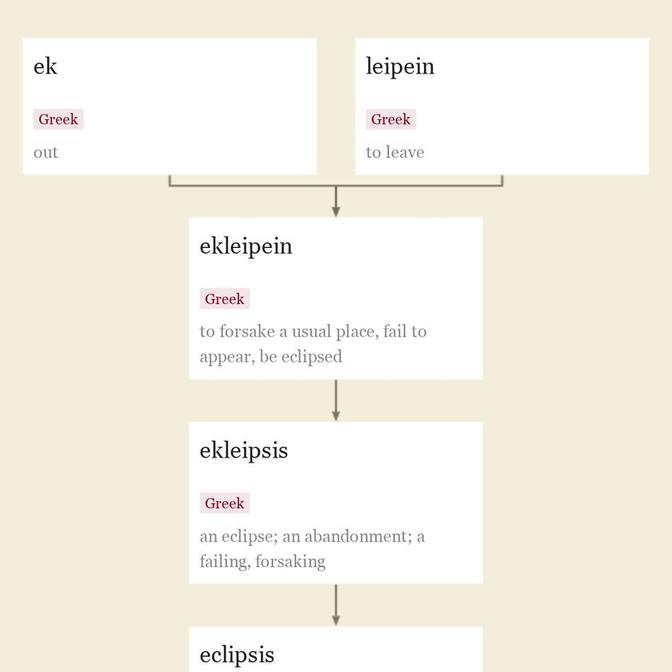 c. 1300, from Old French eclipse "eclipse, darkness" (12c.), from Latin eclipsis, from Greek ekleipsis "an eclipse; an abandonment," literally "a failing, forsaking," from ekleipein "to forsake a usual place, fail to appear, be eclipsed," from ek "out" (see ex-) + leipein "to leave" (from PIE root *leikw- "to leave").
Related entries & more
reliction (n.)

in law, "a recession of the sea or other body of water from the land," also the land thus discovered, 1670s, from Latin relictionem (nominative relictio), noun of action from past participle stem of relinquere "leave behind, forsake, abandon, give up," from re- "back" (see re-) + linquere "to leave" (from PIE *linkw-, nasalized form of root *leikw- "to leave").

"act of forsaking or abandoning," 1590s, from French désertion (early 15c.), from Late Latin desertionem (nominative desertio) "a forsaking, abandoning," noun of action from past-participle stem of Latin deserere "to abandon, to leave, forsake, give up, leave in the lurch," from de "undo" (see de-) + serere "join together, put in a row" (from PIE root *ser- (2) "to line up"). In law, "willful withdrawal of one of the married parties from the other without cause or justification." Earlier in astrology, "forsaking or withdrawal of a favorable influence" (mid-15c.).