The section of entries for the various flushes in Century Dictionary opens with a caveat:

The several words spelled flush, being mostly dialectal, colloquial, or technical, and scantily recorded in early literature, have become partly confused with one another, and cannot now be entirely disentangled. Words originally different have acquired some meanings very nearly identical, while on the other hand there are some meanings not obviously related which are, nevertheless, to be referred to one original.

The meaning "hand of cards all of one suit" (1520s) is of uncertain origin, perhaps formed on the model of French flus (15c.), from Old French flux, flus "a flowing, rolling" (see flux), which, in common with its Italian cognate flusso, is said to have once had a sense of "a run" of cards. The form in English probably was influenced by flush (v.1).

Related entries & more
*bhel- (2)
Proto-Indo-European root meaning "to blow, swell," "with derivatives referring to various round objects and to the notion of tumescent masculinity" [Watkins].

An extended form of the root, *bhelgh- "to swell," forms all or part of: bellows; belly; bilge; billow; bolster; budget; bulge; Excalibur; Firbolgs.

1680s as a name applied to various similar diseases causing inflammation and pain in the joints, from Late Latin rheumatismus, from Greek rheumatismos, from rheumatizein "suffer from the flux," from rheuma "a discharge from the body" (see rheum). "The meaning of a disease of the joints is first recorded in 1688, because rheumatism was thought to be caused by an excessive flow of rheum into a joint thereby stretching ligaments" [Barnhart].

late 14c., reume, "watery fluid or humid matter in the eyes, nose, or mouth" (including tears, saliva, mucous discharge from the nostrils), from Old French reume "a head-cold" (13c., Modern French rhume) and directly from Latin rheuma, reuma, from Greek rheuma "discharge from the body, flux; a stream, current, flood, a flowing," literally "that which flows," from rhein "to flow" (from PIE root *sreu- "to flow").

In old medicine it was conceived as draining from the higher to lower parts of the body and causing ailments if out of balance. Also from late 14c. as "a head-cold, catarrh." The -h- was restored in early Modern English.

The sense of "spurt, rush out suddenly, flow with force" (1540s, usually of water) probably is the same word, with the connecting notion being "sudden movement," but its senses seem more to fit the older ones of flash (v.), now all transferred to this word except in flash flood, via its variant flushe. OED considers this probably not connected to Old French flux. Transitive sense "cause to flow" is from 1590s.

Meaning "cleanse (a drain, etc.) with a rush of water" is from 1789. Of the face, "become suffused with warm color," from 1680s (flushed). Sense of "inflame with pride or passion" as a result of success, victory, etc., is from 1630s; perhaps influenced in sense by flesh (v.). Related: Flushed; flushing.
Related entries & more
course (n.) 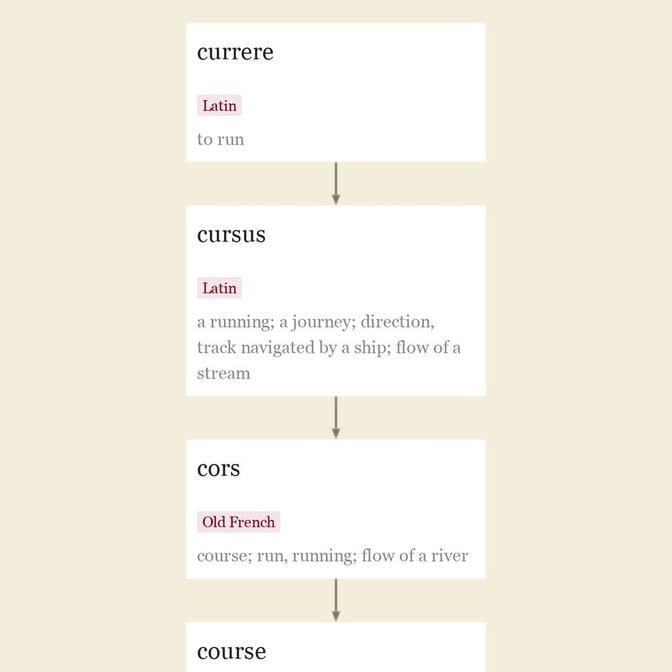 c. 1300, "onward movement, motion forward, a running in a prescribed direction or over a prescribed distance; path or distance prescribed for a race, a race-course" from Old French cors "course; run, running; flow of a river" (12c.), from Latin cursus "a running; a journey; direction, track navigated by a ship; flow of a stream;" from curs- past participle stem of currere "to run" (from PIE root *kers- "to run").

Also from c. 1300 as "order, sequence;" meanings "habitual or ordinary procedure" (as in course of nature) and "way of life, personal behavior or conduct" are from early 14c.

Most of the extended senses developed 14c. from notion of "line in which something moves" (as in hold one's course) or "stage through which something must pass in its progress." Thus, via the meaning "series or succession in a specified or systematized order" (mid-14c.) comes the senses of "succession of prescribed acts intended to bring about a particular result" (c. 1600, as in course of treatment) and the academic meaning "planned series of study" (c. 1600; in French from 14c.), also "that part of a meal which is served at once and separately" (late 14c.).

Meaning "the flow of a stream of water" is from mid-14c.; that of "channel in which water flows" is from 1660s. Courses was used for the flow of bodily fluids and 'humors' from late 14c.; specifically of menstrual flux from 1560s.

Adverbial phrase of course "by consequence, in regular or natural order" is attested from 1540s, literally "of the ordinary course;" earlier in the same sense was bi cours (c. 1300). Matter of course "something to be expected" is by 1739.