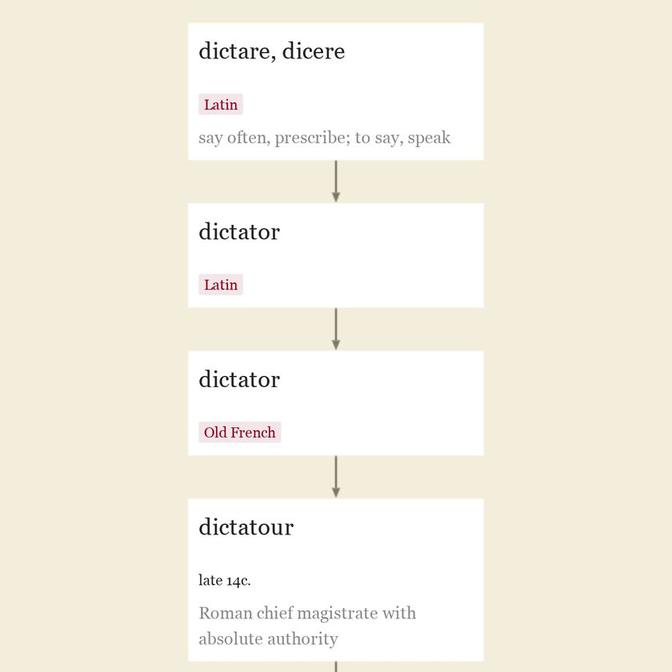 In Latin, a dictator was a judge in the Roman republic temporarily invested with absolute power; this historical sense was the original one in English. The transferred sense of "absolute ruler, person possessing unlimited powers of government" is from c. 1600; that of "one who has absolute power or authority" of any kind, in any sphere is from 1590s.

1701, "pertaining to a dictator; absolute, unlimited;" see dictator + -ial. Meaning "imperious, overbearing" is from 1704. Related: Dictatorially. Earlier in the sense "pertaining to a dictator" were dictatorian (1640s); dictator-like (1580s). "Dictatorial implies, on the one hand, a disposition to rule, and, on the other, a sharp insistence upon having one's orders accepted or carried out." [Century Dictionary]

"supreme military commander," 1620s, from Italian generalissimo, superlative of generale, from a sense development similar to French general (see general (n.)). Parson Weems applied it to George Washington. In 20c. use sometimes from Spanish generalísimo in reference to the military dictator Franco.

The Latin word was borrowed earlier into continental Germanic, where it became Old High German dihton "to write compose," German dichten "to write poetry." It was so nativized in late Old English that it was used to gloss Latin dictator. In Middle English, dight exploded to a vast array of meanings (including "to rule," "to handle," "to abuse," "to have sex with," "to kill," "to clothe," "to make ready," "to repair") till it was one of the most-used verbs in the language, but all its senses have faded into obscurity or survive only in dialectal or poetic use.