Proto-Indo-European root meaning "right, opposite left," hence "south" (from the viewpoint of one facing east).

masc. proper name, in Old Testament, Jacob's youngest son (Genesis xxxv.18), from Hebrew Binyamin, literally "son of the south," though interpreted in Genesis as "son of the right hand," from ben "son of" + yamin "right hand," also "south" (in an East-oriented culture). Compare Arabic cognate yaman "right hand, right side, south;" yamana "he was happy," literally "he turned to the right."

In reference to a favorite younger son, it is from the story of Jacob's family in Genesis. With familiar forms Benjy, Benny. Slang meaning "money" (by 1999) is from the portrait of Founding Father Benjamin Franklin on the U.S. $100 bill. In some old uses in herb-lore, etc., it is a folk-etymology corruption of benzoin. 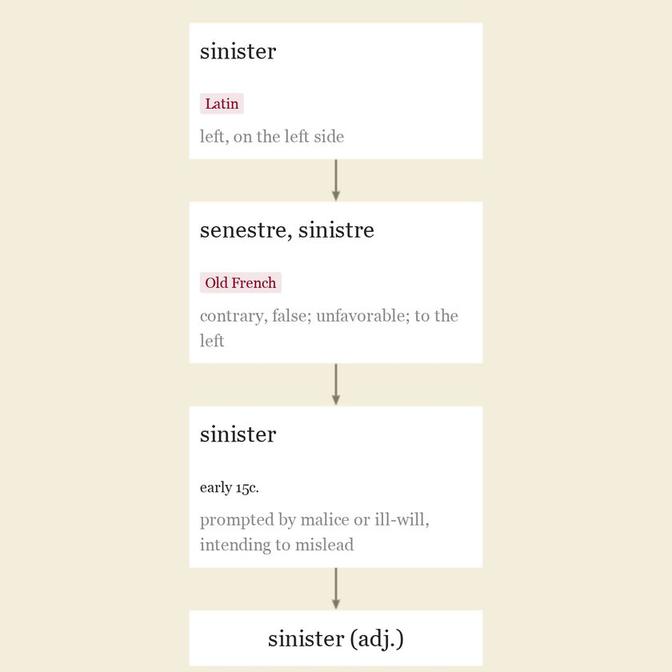 early 15c., sinistre, "prompted by malice or ill-will; false, dishonest, intending to mislead," with suggestion, report, etc., from Old French senestre, sinistre "contrary, false; unfavorable; to the left" (14c.), from Latin sinister "left, on the left side" (opposite of dexter), a word of uncertain origin. Perhaps meaning properly "the slower or weaker hand" [Tucker], but Klein and Buck suggest it's a euphemism (see left (adj.)) and connected with the root of Sanskrit saniyan "more useful, more advantageous." With contrastive or comparative suffix -ter, as in dexter (see dexterity).

In reference to persons, "deceitful, perfidious," from late 15c. The classical literal sense of "left as opposed to right, in the left side (of the body)" is attested in English from c. 1500. In heraldry (from 1560s) sinister indicates "left, to the left." Related: Sinisterly; sinisterness.

Bend sinister (not bar sinister) in heraldry indicates illegitimacy and preserves the literal sense of "on or from the left side" (though in heraldry this is from the view of the bearer of the shield, not the observer of it; see bend (n.2)).

"character or skill of a marksman; dexterity in shooting at the mark," 1823, from marksman + -ship.

"sleight of hand; the performance of feats requiring dexterity and skill, particularly of the fingers," 1843, from French prestidigitation, which was coined along with prestidigitator (q.v.).

dexterity game played with a ball and small objects, 1900, from earlier jackstone "small round pebble used in games" (1792), which seems to be an alteration of checkstone (1745). The metal pieces with five arms or tines, made to be used in the game, are so called from 1908.

Sense expanded in Old English to include "skill, dexterity; art, science, talent" (via a notion of "mental power"), which led by late Old English to the meaning "trade, handicraft, employment requiring special skill or dexterity," also "something built or made." The word still was used for "might, power" in Middle English.

Use for "small boat" is first recorded 1670s, probably from a phrase similar to vessels of small craft and referring either to the trade they did or the seamanship they required, or perhaps it preserves the word in its original sense of "power."