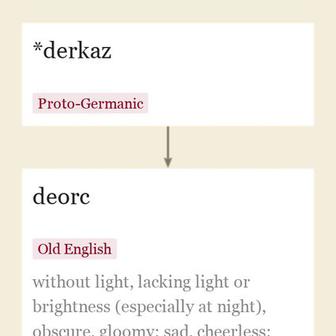 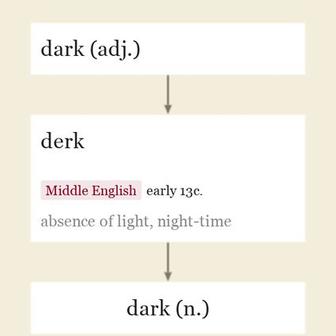 also darkroom, in photography, "room from which any light that would affect a photographic plate or film has been excluded," 1841, from dark (adj.) + room (n.).

Old English dunn "dingy brown; dark-colored," perhaps from Celtic (compare Old Irish donn "dark;" Gaelic donn "dull; dark brown; dark;" Welsh dwnn "brownish"), from PIE *donnos, *dusnos "dark." As a noun, "dun color," 1560s; as "a dun horse" from late 14c. The "horse" meaning is that the figurative expression dun is in the mire "things are at a standstill or deadlocked," which occurs in both Chaucer and Shakespeare. Dun also is likely the origin of the surnames Dunn, Dunne, Donne, Dunning, etc.

place in California; according to Bright, the name is Obsipeño (Chumashan) /pismu'/ "tar, asphalt," literally "the dark stuff," from /piso'/ "to be black, dark."