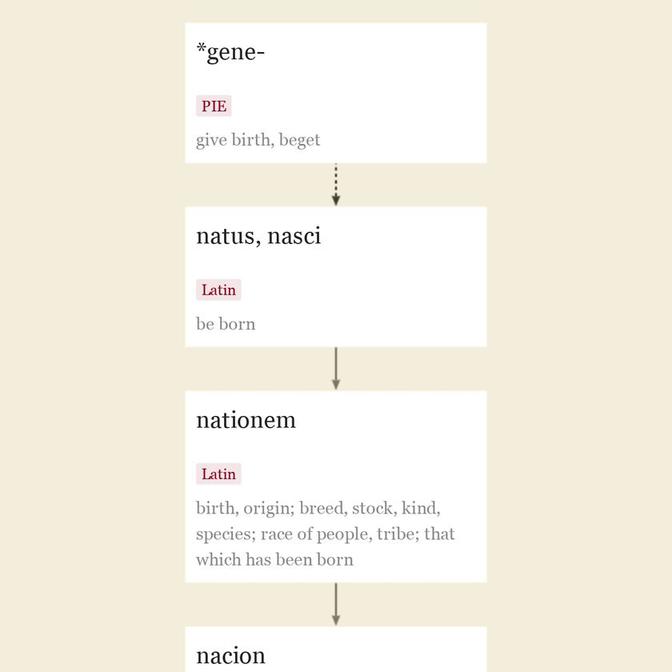 The word is used in English in a broad sense, "a race of people an aggregation of persons of the same ethnic family and speaking the same language," and also in the narrower sense, "a political society composed of a government and subjects or citizens and constituting a political unit; an organized community inhabiting a defined territory within which its sovereignty is exercised."

In Middle English it is not easy to distinguish them, but the "political society" sense emerged by 16c., perhaps late 14c. and it has gradually predominated. The older sense is preserved in the application of nation to the native North American peoples (1640s). Nation-building "creation of a new nation" is attested by 1907 (implied in nation-builder). Nation-state "sovereign country the inhabitants of which are united by language, culture, and common descent" is from 1918.

A nation is an organized community within a certain territory; or in other words, there must be a place where its sole sovereignty is exercised. [Theodore D. Woolsey, "Introduction to the Study of International Law," 1864]

Meaning "a central portion cut and removed" (as from a tree, soil, etc.) is from 1640s. Meaning "internal mold of a casting, which fills the space intended to be left hollow" is from 1730. Nuclear physics sense "portion of a reactor containing the nuclear fuel and where the reactions take place" is from 1949.

"instrument for cutting the core out of an apple or other fruit," 1796, agent noun from core (v.).

also nation-wide, "extending over or affecting a whole nation," 1895, from nation + wide.

"fuel residue, solid product of the carbonization of coal,"an important substance in metallurgy, 1660s, a northern England dialect word, perhaps a variant of Middle English colke "core (of an apple), heart of an onion" (c. 1400), also "charcoal" (early 15c.), a word of uncertain origin. It seems to have cognates in Old Frisian and Middle Dutch kolk "pothole," Old English -colc, in compounds, "pit, hollow," Swedish dialectal kälk "pith." Perhaps the notion is the "core" of the coal, or "what is left in the pit after a fire."