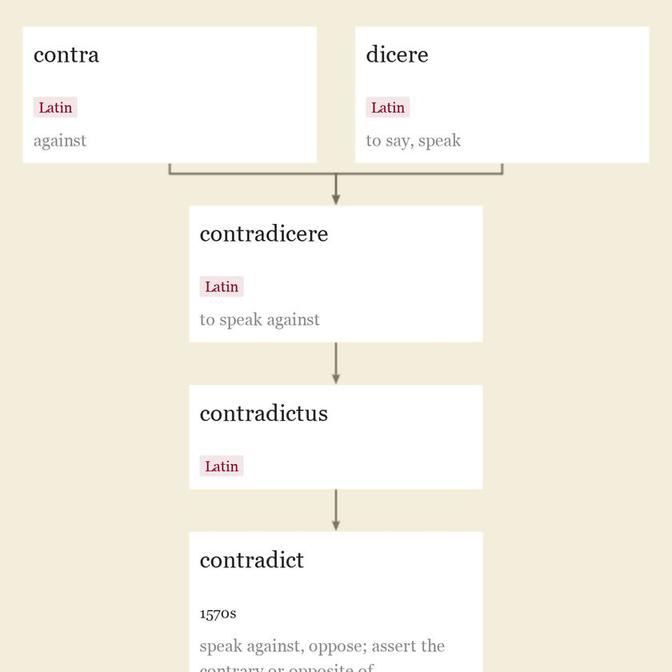 "to unsay, to contradict or withdraw a declaration or proposition," 1530s, from Latin recantare "recall, revoke," from re- "back" (see re-) + cantare, literally "to chant, to sing" (from PIE root *kan- "to sing"). The English word is from the Reformation; the Latin verb is a loan-translation of Greek palinoidein "recant," from palin "back" + oeidein "to sing." Related: Recanted; recanting. It was used occasionally 17c. in an etymological sense of "sing over again" (with re- = "again").

Related entries & more
Advertisement
belie (v.)
Old English beleogan "to deceive by lies," from be- + lie (v.1) "to lie, tell lies." Current sense of "to contradict as a lie, give the lie to, show to be false" is first recorded 1640s.

The other verb lie once also had an identical variant form, from Old English belicgan, which meant "to encompass, beleaguer," and in Middle English was a euphemism for "to have sex with" (i.e. "to lie with carnally").
Related entries & more
gainsay (v.)
"contradict, deny, dispute," c. 1300, literally "say against," from gain- (Old English gegn- "against;" see again) + say (v.). In Middle English it translates Latin contradicere. "Solitary survival of a once common prefix" [Weekley]. It also figured in such now-obsolete compounds as gain-taking "taking back again," gainclap "a counterstroke," gainbuy "redeem," Gaincoming "Second Advent," and gainstand "to oppose." Related: Gainsaid; gainsaying.
Related entries & more
oppose (v.)

late 14c., opposen, "to speak or act against; accuse, question, interrogate," from Old French oposer "oppose, resist, rival; contradict, state opposing point of view" (12c.), apparently from assimilated form of Latin ob- "in the direction of, in front of" (see ob-) + French poser "to place, lay down" (see pose (v.1)), with the sense blended with that of Latin opponere "oppose, object to, set against" (see opponent). The meaning "to set or place over against or directly opposite" (transitive) and "interpose effort or objection, be adverse, act adversely" (intransitive) are from 1590s. Related: Opposed; opposing.

1530s, "mutually opposed, at variance, inconsistent, incapable of being true together," from Late Latin contradictorius "containing a contradiction or objection," from contradictus, past participle of contradicere "to speak against" (see contradiction).

Sense of "denying that something stated or approved is completely true" is from c. 1600. Meaning "fond of contradicting" is from 1891. Other adjectives, now obsolete, in the same sense were contradictorious (early 15c.), contradictious (c. 1600), contradictive (1620s). Related: Contradictorily. Used earlier as a noun (late 14c.) in plural contradictories, "a pair of propositions inconsistent with each other."

Meaning "an assertion of the direct opposite of what has been said or affirmed" is from c. 1400. Sense of "a contradictory fact or condition" is from 1610s.  Contradiction in terms "self-contradictory phrase" is attested from 1705.