late 14c., "depending upon circumstances, not predictable with certainty, provisionally liable to exist," from Old French contingent or directly from Latin contingentem (nominative contingens) "happening; touching," in Medieval Latin "possible, contingent," present participle of contingere "to happen to one, befall, come to pass," originally "to touch" (see contact (v.)).

Meaning "not existing or occurring through necessity, happening by chance, accidental" is from 1610s. The noun is from 1540s, "thing happening by chance or by the will of a finite free agent;" as "a group forming part of a larger group" from 1727, originally especially "share of troops to be furnished by a power in a treaty or alliance," on the notion of "that which falls to one in a division or apportionment among a number." 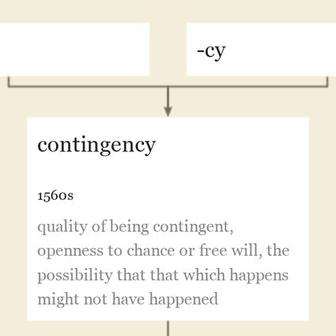 1560s, "quality of being contingent, openness to chance or free will, the possibility that that which happens might not have happened," from contingent + abstract noun suffix -cy. Meaning "a chance occurrence, an accident, an event which may or may not occur" is from 1610s.

late 14c., "the assumption or possibility that that which happens is dependent upon circumstances or chance," from Medieval Latin contingentia, from contingent- present participle stem of contingere "to touch" (see contact (n.)).

"of uncertain outcome, depending on a contingent event," literally "depending on the throw of a die," 1690s, from Latin aleatorius "pertaining to a gamester," from aleator "a dice player," from alea "a game with dice; chance, hazard, risk; a die, the dice;" perhaps literally "a joint-bone" (marked knuckle-bones used as early dice), "a pivot-bone," and related to axis. Aleatoric "incorporating chance and randomness" was used as a term in the arts from 1961.

also dependant, late 14c., "relying for existence on;" early 15c. as "contingent, related to some condition;" from Old French dependant, present-participle adjective from dependre "to hang down," from Latin dependere "to hang from, hang down; be dependent on, be derived," from de "from, down" (see de-) + pendere "to hang, cause to hang; weigh" (from PIE root *(s)pen- "to draw, stretch, spin").

For spelling, see dependant (n.). In some cases the English word is directly from Latin dependentem (nominative dependens), present participle of dependere. From early 15c. in the literal sense of "hanging down, pendent." From 1640s as "subordinate, under the control of or needing aid from an extraneous source." Dependent variable in mathematics is recorded from 1852.

1844, "devotion to one's country, national spirit or aspirations, desire for national unity, independence, or prosperity;" see nationalist + -ism; in some usages from French nationalisme. Earlier it was used in a theological sense of "the doctrine of divine election of nations" (1836). Later it was used in a sense of "doctrine advocating nationalization of a country's industry" (1892). An earlier word for "devotion or strong attachment to one's own country" was nationality (1772).

To place the redemptive work of the Christian Faith in social affairs in its proper setting, it is necessary to have clearly in mind at the outset that the consciousness of "the nation" as the social unit is a very recent and contingent experience. It belongs to a limited historical period and is bound up with certain specific happenings, theories of society and attitudes to life as a whole. [Vigo A. Demant, "God, Man and Society"]

c. 1300, "something that takes place, what happens, an occurrence" (good or bad, but more often bad), especially one that is unexpected, unforeseen, or beyond human control, also "one's luck, lot, or fortune," good or bad; in a positive sense "opportunity, favorable contingency;" also "contingent or unexpected event, something that may or may not come about or be realized." It is from Old French cheance "accident, chance, fortune, luck, situation, the falling of dice" (12c., Modern French chance), from Vulgar Latin *cadentia "that which falls out," a term used in dice, from neuter plural of Latin cadens, present participle of cadere "to fall" (from PIE root *kad- "to fall").

In English frequently in plural, chances. The word's notions of "opportunity" and "randomness" are as old as the record of it in English and now all but crowd out its original notion of "mere occurrence." The meaning "fortuity, absence of any cause why an event should happen or turn out as it does, variability viewed as a real agent" is from c. 1400.

Chance is equivalent to the mathematical concept of probability, which is a precisely measurable factor enabling the accurate prediction of average outcomes over long runs of random events — the longer the run, the more accurate the predictions. Luck is at best a platitude and at worst a superstition. [David Partlett, "A History of Card Games"]

Main chance "probability that offers greatest advantage," hence "thing of most importance" is from 1570s. The mathematical sense of "probability, likelihood of a certain outcome" is from 1778, hence the odds-making sense of "balanced probability of gain or loss."