"a collection into one mass or aggregate," 1610s, from Latin congeries "heap, pile, collected mass," from congerere "to bring together, pile up," from assimilated form of com "with, together" (see con-) + gerere "to carry, perform" (see gest). False singular congery is attested by 1866.

Man should have some sense of responsibility to the human congeries. As a matter of observation, very few men have any such sense. No social order can exist very long unless a few, at least a few, men have such a sense. [Ezra Pound, "ABC of Economics," 1933]

early 15c., "accumulated;" 1570s, "heaped up, gathered into a mass," past-participle adjective from congest. Medical sense of "containing an unnatural accumulation of fluid" is from 1758. Meaning "overcrowded" is recorded from 1862.

1620s, "kindred, partaking of the same nature or natural characteristics," from assimilated form of Latin com "with, together" (see con-) + genialis "of birth," thus, "kindred" (from PIE root *gene- "give birth, beget," with derivatives referring to procreation and familial and tribal groups). Sense of "agreeable" is first recorded 1711 on the notion of "having natural affinity." Also compare congenital.

"large, voracious species of salt-water eel," c. 1300, from Latin conger "sea-eel," from Greek gongros "conger," which is often considered to be Pre-Greek.

late 14c., congelen, from Old French congeler (14c.) "to freeze, thicken," from Latin congelare "to cause to freeze, to freeze together," from assimilated form of com "with, together" (see con-) + gelare "to freeze," from gelu "frost, ice" (from PIE root *gel- "cold; to freeze"). Related: Congealed; congealing; congealment.

early 15c., "accumulation of morbid matter in the body," from Old French congestion (14c.) and directly from Latin congestionem (nominative congestio) "a heaping up," noun of action from past participle stem of congerere "to bring together, pile up," from assimilated form of com "with, together" (see con-) + gerere "to carry, perform" (see gest). Medical sense "unnatural accumulation of fluid" is from 1630s; meaning "a crowding together of people, traffic, etc." is from 1883.

"pertaining to or causing congestion," 1817, from congest + -ive. Congestive heart failure is recorded from 1928.

1610s, "state of being kindred; affinity of character or interests;" as if from Latin but apparently a modern formation; compare congenial + -ity. 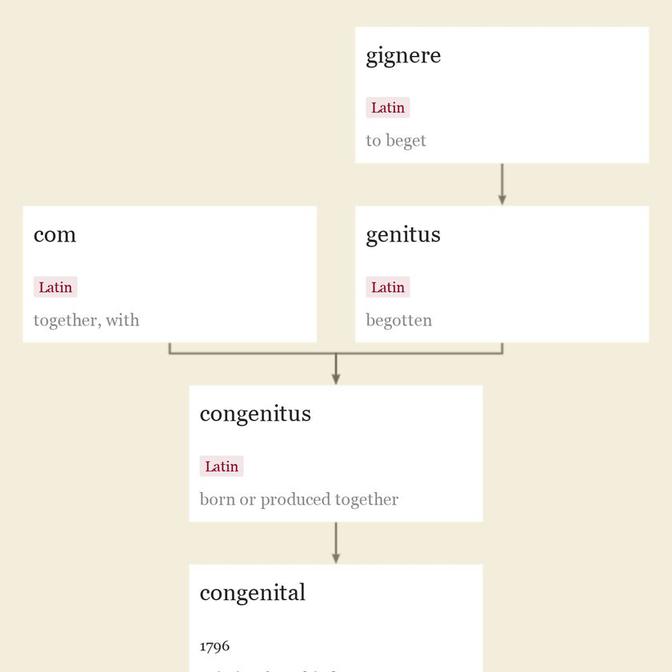 "existing from birth," 1796, from Latin congenitus "born or produced together," from assimilated form of com "together, with" (see con-) + genitus, past participle of gignere "to beget" (from PIE root *gene- "give birth, beget"). This sense formerly belonged to congenial (which is attested from 1660s with this meaning). Related: Congenitally.