c. 1400, "act of compressing, state of being compressed," from Old French compression (14c.) and directly from Latin compressionem (nominative compressio) "a pressing together," noun of action from past participle stem of comprimere "to squeeze" (see compress (v.)). Related: Compressional. Compressional wave is attested from 1887.

"process of relieving or reducing pressure," 1905, from de- + compression. Decompression chamber is attested by 1903.

1590s, "unite or consolidate by hammering or compression, often after softening by heating," alteration of well (v.) "to boil, rise;" influenced by past participle form welled. Related: Welded; welding.

1640s, "springing back, returning to the original position," from Latin resilientem "inclined to leap or spring back," present participle of resilire "to jump back" (see resilience). Of material things, "resuming original shape after compression, etc.," by 1670s. Figuratively, of persons "bouncing back" from difficulties, etc., from 1830. Related: Resiliently. 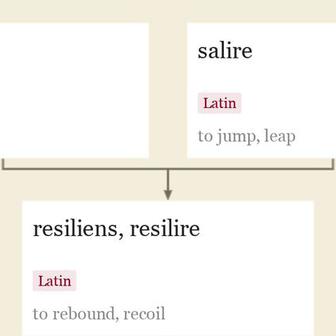 1620s, "act of rebounding or springing back," often of immaterial things, from Latin resiliens, present participle of resilire "to rebound, recoil," from re- "back" (see re-) + salire "to jump, leap" (see salient (adj.)). Compare result (v.). In physical sciences, the meaning "elasticity, power of returning to original shape after compression, etc." is by 1824.

1540s, "pertaining to the two great arteries of the neck," from Greek karotidēs "great arteries of the neck," plural of karotis, from karoun "plunge into sleep or stupor," because compression of these arteries was believed to cause unconsciousness (Galen). But if this is folk etymology, the Greek word could be from kara "head," related to kranion "skull, upper part of the head" (from PIE root *ker- (1) "horn; head").

1650s, formerly also elastick, coined in French (1650s) as a scientific term to describe gases, "having the property of recovering its former volume after compression," from Modern Latin elasticus, from Greek elastos "ductile, flexible," related to elaunein "to strike, beat out," which is of uncertain origin; according to Watkins from an extended form of the PIE base *ele- "to go."

Applied to solids from 1670s, "having the power of returning to the form from which it is bent, etc., as soon as the applied force is removed." Figurative use by 1859. The noun meaning "piece of elastic material," originally a cord or string woven with rubber, is from 1847, American English.

"a sheet containing intelligence or reports of passing events, issued at short but regular intervals," 1660s, newes paper, though the thing itself is older (see gazette); from news (n.) + paper (n.).

[T]he newspaper that drops on your doorstep is a partial, hasty, incomplete, inevitably somewhat flawed and inaccurate rendering of some of the things we have heard about in the past twenty-four hours — distorted, despite our best efforts to eliminate gross bias, by the very process of compression that makes it possible for you to lift it from the doorstep and read it in about an hour. If we labeled the product accurately, then we could immediately add: But it's the best we could do under the circumstances, and we will be back tomorrow with a corrected and updated version. [David Broder, Pulitzer Prize acceptance speech, 1973]