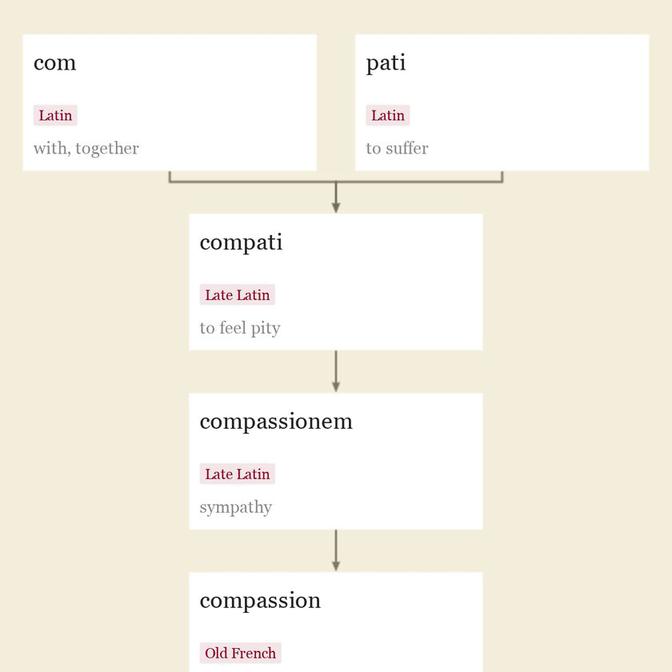 "characterized by compassion," 1580s, from compassion + -ate (1). Related: Compassionately. Phrase compassionate conservatism in American political language recorded by 1992, popularized, if not coined, by Marvin Olasky, instructor at University of Texas at Austin.

Ruthful "pitiable, lamentable, causing ruth" (c. 1200) has fallen from use since late 17c. except as a deliberate archaism, perhaps in part because it had a conflicting sense of "compassionate, tender-hearted, full of ruth." Ruthness "compassion, pity" (early 14c.) died even younger. Related: Ruthlessly; ruthlessness.

It is some comfort to receive commiseration or condolence ; it gives one strength to receive sympathy from a loving heart ; it is irksome to need compassion ; it galls us to be pitied. [Century Dictionary, 1895]

Middle English pity also could mean "devout obedience to God" (mid-14c.), and pity and piety were not fully distinguished until 17c. Transferred sense of "grounds or cause for pity, matter or source of grief or regret" is from late 14c.

"sympathetic suffering of grief or sorrow for the afflictions or distress of another," 1580s, from French commisération, from Latin commiserationem (nominative commiseratio) "part of an oration intended to excite compassion," noun of action from past-participle stem of commiserari "to pity," from com-, here perhaps an intensive prefix (see com-) + miserari "bewail, lament," from miser "wretched" (see miser).

The transferred sense of "the viscera as the seat of emotions" is from late 14c.; especially "inner parts as the seat of pity or kindness," hence "tenderness, compassion." Greek splankhnon (from the same PIE root as spleen) was a word for the principal internal organs, which also were felt in ancient times to be the seat of various emotions. Greek poets, from Aeschylus down, regarded the bowels as the seat of the more violent passions such as anger and love, but by the Hebrews they were seen as the seat of tender affections, especially kindness, benevolence, and compassion. Splankhnon was used in Septuagint to translate a Hebrew word, and from thence early Bibles in English rendered it in its literal sense as bowels, which thus acquired in English a secondary meaning of "pity, compassion" (late 14c.). But in later editions the word often was translated as heart. Bowel movement is attested by 1874. 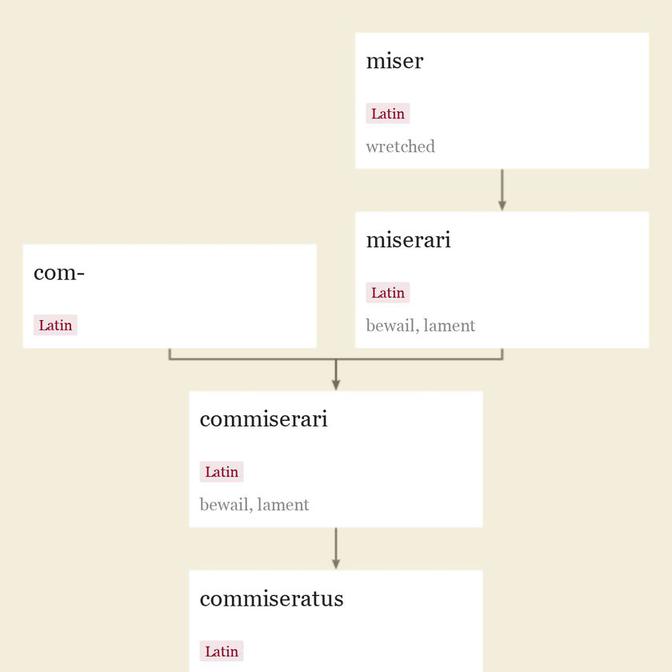