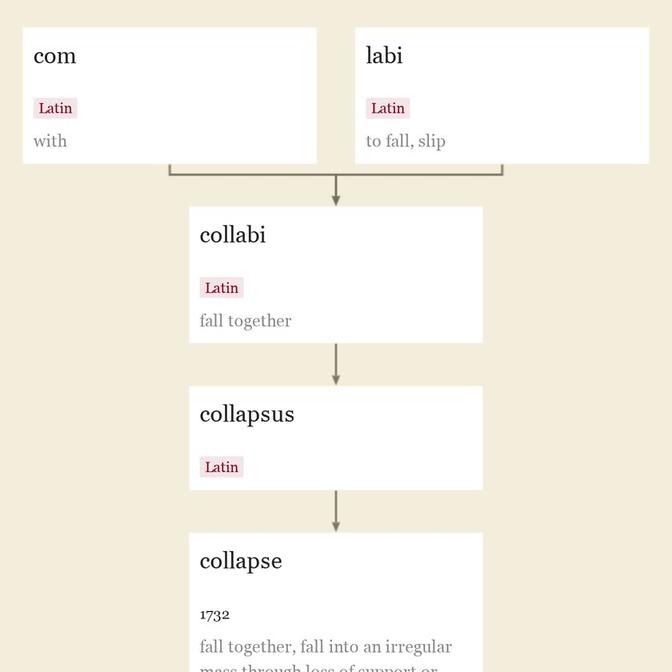 1732, "fall together, fall into an irregular mass through loss of support or rigidity," from Latin collapsus, past participle of collabi "fall together," from assimilated form of com "with, together" (see com-) + labi "to fall, slip" (see lapse (n.)).

Figurative sense of "come to nothing, fail" is from 1801. Transitive sense "cause to collapse" is from 1883. The adjective collapsed is attested from c. 1600, originally of groups of persons, "fallen from a spiritual or religious state," perhaps from co- + lapsed. Related: Collapsing. 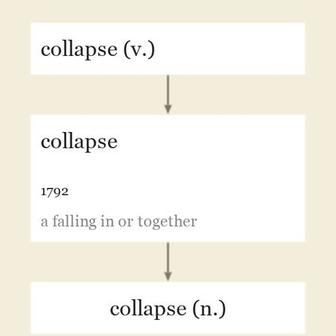 "capable of collapsing, made so as to collapse," 1843, from collapse (v.) + -able. Collapsible is more common in modern use.

"capable of collapsing, made so as to collapse," 1842, alternative spelling of collapsable; see collapse (v.) + -ible.

early 15c., caven, "to hollow something out," from cave (n.). Modern sense "to collapse in or down" is 1707, American English, presumably from East Anglian dialectal calve "collapse, fall in and leave a hollow," which is perhaps from Flemish and subsequently was influenced by cave (n.). Transitive sense by 1762. Related: Caved; caving. Figurative sense of "yield to pressure" is from 1837.

late Old English, "act of giving way and falling down" (a sense now obsolete), from Latin ruina "a collapse, a rushing down, a tumbling down" (source also of Old French ruine "a collapse," Spanish ruina, Italian rovina), which is a derivative of ruere "to rush, fall violently, collapse" (from PIE *reue- (2) "to smash, knock down, tear out, dig up;" see rough (adj.)).

The sense of "descent from a state of prosperity, degradation, downfall or decay of a person or society" is from late 14c. The general meaning "violent or complete destruction" (of anything), "a profound change so as to unfit a thing for use" (of one's principles, one's shirt, etc.) is by 1670s; the sense of "that which causes destruction or downfall" is from early 15c. The meaning "dishonor," of a woman, is from 1620s. Ruins "remains of a decayed building or town" is from mid-15c.; the same sense was in the Latin plural noun.