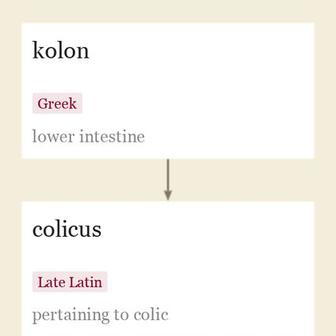 "nauseated feeling, disordered indisposition in the bowels," 1823, probably a fanciful formation from colic and wobble. Perhaps suggested by cholera morbus.

Related entries & more
ileum (n.)
lowest part of the small intestine, 1680s, medical Latin, from ileum, in medieval medicine "the part of the small intestines in the region of the flank," singular created from Latin ilia (pl.) "groin, flank," in classical Latin, "belly, the abdomen below the ribs," poetically, "entrails, guts." The word apparently was confused in Latin with Greek eileos "colic" (see ileus), or perhaps is a borrowing of it. The sense is "winding, turning," either via the Greek meaning or from the convolutions of the intestines. Earlier in English ylioun (late 14c.), from Medieval Latin ileon. Related: Ileitis; ileal.
Related entries & more
Miserere (n.)

c. 1200, "recitation of the 51st Psalm" (in Vulgate, the 50th), one of the "Penitential Psalms," so called from the phrase Miserere mei Deus "Have mercy upon me, O God," the opening line of it in the Vulgate, from Latin miserere "feel pity, have compassion, commiserate," second person singular imperative of misereri "to have mercy," from miser "wretched, pitiable" (see miser).

From 15c.-17c. it was used as an informal measure of time, "the time it takes to recite the Miserere." The musical settings of the psalm are noted for their striking effectiveness. The Latin verb also is in miserere mei "kind of severe colic ('iliac passion') accompanied by excruciating cramps and vomiting of excrement" (1610s); literally "have mercy on me."