"nonsense," 1900, short for bunkum, phonetic spelling of Buncombe, a county in North Carolina. The usual story (attested by 1841) of its origin is this: At the close of the protracted Missouri statehood debates in the U.S. Congress, supposedly on Feb. 25, 1820, North Carolina Rep. Felix Walker (1753-1828) began what promised to be a "long, dull, irrelevant speech," and he resisted calls to cut it short by saying he was bound to say something that could appear in the newspapers in the home district and prove he was on the job. "I shall not be speaking to the House," he confessed, "but to Buncombe." Thus Bunkum has been American English slang for "nonsense" since 1841 (it is attested from 1838 as generic for "a U.S. Representative's home district").

MR. WALKER, of North Carolina, rose then to address the Committee on the question [of Missouri statehood]; but the question was called for so clamorously and so perseveringly that Mr. W. could proceed no farther than to move that the committee rise. [Annals of Congress, House of Representatives, 16th Congress, 1st Session, p. 1539]

"Well, when a critter talks for talk sake, jist to have a speech in the paper to send to home, and not for any other airthly puppus but electioneering, our folks call it Bunkum." [Thomas Chandler Haliburton, "Sam Slick in England," 1858]

1917, theater slang, "melodramatic, exaggerated acting," probably formed on model of bunkum (see bunk (n.2)), and perhaps also influenced by or based on hocus-pocus.

"expose false or nonsensical claims or sentiments," 1923, from de- + bunk (n.2); apparently first used by U.S. novelist William Woodward (1874-1950), in his best-seller "Bunk;" the notion being "to take the bunk out of things." It got a boost from Harold U. Faulkner's "Colonial History Debunked" [Harper's Magazine, December 1925], which article itself quickly was debunked, and the word was in vogue in America in the mid-1920s. Related: Debunked; debunking.

Wets and Drys, Fundamentalists and Modernists, are busily engaged in debunking one another to the delight and edification of a public which divides its time between automobiling and listening-in. Is it art, or education, or religion that you prefer? You have only to get the right station and what you last heard about the matter will be cleverly debunked while you wait. [Carl Vernon Tower, "Genealogy 'Debunked," in Annual Reports of the Tower Genealogical Society, 1925]

It was, naturally, execrated in England.

The origin of to debunk is doubtless the same as that of American jargon in general — the inability of an ill-educated and unintelligent democracy to assimilate long words. Its intrusion in our own tongue is due partly to the odious novelty of the word itself, and partly to the prevailing fear that to write exact English nowadays is to be put down as a pedant and a prig. [letter to the editor, London Daily Telegraph, March 2, 1935, cited in Mencken, "The American Language"]

1758, originally Scottish, "seat, bench," a word of uncertain origin, possibly a variant of banker "bench" (1670s; see bank (n.2)); or possibly from a Scandinavian source (compare Old Swedish bunke "boards used to protect the cargo of a ship"). The meaning "receptacle for coal aboard a ship" is from 1839. In reference to sand-holes on golf courses, by 1824, from the extended sense "earthen seat" (1805). The meaning "dug-out fortification" probably is from World War I.

The wide spread of this word for "a bag" probably is due to the incident in the Biblical story of Joseph in which a sack of corn figures (Genesis xliv). In English, the meaning "a sack or sack material used as an article of clothing" as a token of penitence or mourning is from c. 1200. The baseball slang sense of "a base" is attested from 1913.

plural of man (n.). In common with German Männer, etc., it shows effects of i-mutation. Used as an indefinite pronoun ("one, people, they") from late Old English. Men's liberation first attested 1970. Men's room "a lavatory for men" is by 1908, American English. Earlier it had a more general sense:

men's room, n. "One end of this [cook and dining] room is partitioned off for a men's room, where the crew sit evenings, smoking, reading, singing, grinding their axes, telling stories, etc., before climbing the ladder to their night's rest in the bunk room ... For many years women have been employed in [logging] camps as cooks, hence the name men's room, for the crew are not allowed in the cook room except at meal time." [quoted in "Some Lumber and Other Words," in Dialect Notes, vol. II, part VI, 1904]

Menswear (also men's wear) "clothes for men" is by 1906. To separate the men from the boys in a figurative sense "distinguish the manly, mature, capable, etc. in a group from the rest" is from 1943; earliest uses tend to credit it to U.S. aviators in World War II.

One of the most expressive G.I. terms to come out of the late strife was "that's where they separate the men from the boys" — so stated by American aviators leaning from their cockpits to observe a beach-landing under fire on some Pacific island far below. ["Arts Magazine," 1947] 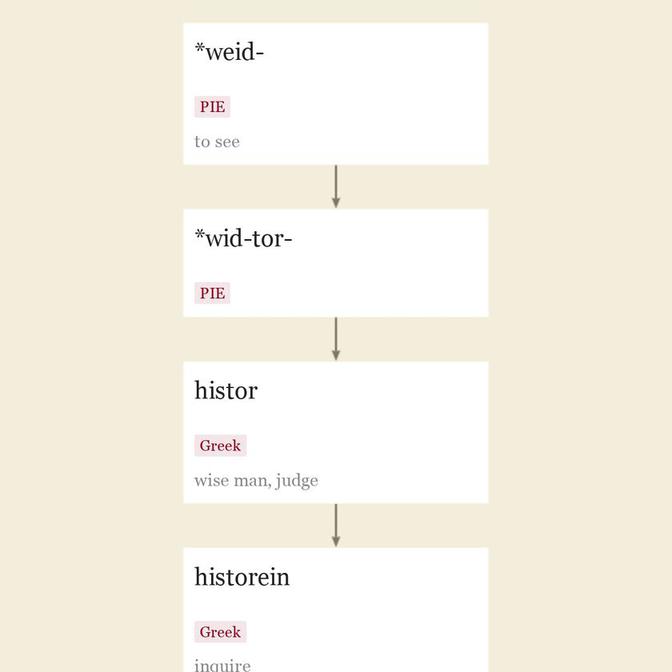 It is thus related to Greek idein "to see," and to eidenai "to know." Beekes writes of histōr that "The word itself, but especially the derivations ... that arose in Ionic, have spread over the Hellenic and Hellenistic world together with Ionic science and philosophy."

In Middle English, not differentiated from story (n.1); sense of "narrative record of past events" probably first attested late 15c. Meaning "the recorded events of the past" is from late 15c. As a branch of knowledge, from late 15c. Meaning "a historical play or drama" is from 1590s. Sense of "systematic account (without reference to time) of a set of natural phenomena" (1560s) is now obsolete except in natural history (as late as the 1880s published county histories in the U.S. routinely included natural history chapters, with lists of birds and fishes and illustrations of local slugs and freshwater clams). Meaning "an eventful career, a past worthy of note" (a woman with a history) is from 1852. To make history "be notably engaged in public events" is from 1862.

History is the interpretation of the significance that the past has for us. [Johan Huizinga, "The Task of the Cultural Historian"]

One difference between history and imaginative literature ... is that history neither anticipates nor satisfies our curiosity, whereas literature does. [Guy Davenport, "Wheel Ruts," 1996]