Advertisement
all
word
name
phrase
suffix
prefix
word root
284 entries found.
building (n.)
c. 1300, "a structure;" late 14c., "act or process of constructing;" verbal noun from build (v.). Building-block is 1846 as "one of a set of children's play blocks;" 1849 as "temporary support on which a ship's keel rests while the ship is being constructed;" 1856 as "cinder-block, concrete block, artificial stone block used in building construction." Figurative sense "basic unit from which something is constructed" is by 1955.
Related entries & more
Advertisement
outbuilding (n.)

In the United States, this verb is used with much more latitude than in England. There, as Fennimore Cooper puts it, everything is BUILT. The priest BUILDS up a flock; the speculator a fortune; the lawyer a reputation; the landlord a town; and the tailor, as in England, BUILDS up a suit of clothes. A fire is BUILT instead of made, and the expression is even extended to individuals, to be BUILT being used with the meaning of formed. [Farmer, "Slang and Its Analogues," 1890]

Related entries & more
Advertisement
facade (n.)
1650s, "front of a building," from French façade (16c.), from Italian facciata "the front of a building," from faccia "face," from Vulgar Latin *facia (see face (n.)). Figurative use by 1845.
Related entries & more
structure (n.)
mid-15c., "action or process of building or construction;" 1610s, "that which is constructed, a building or edifice;" from Latin structura "a fitting together, adjustment; a building, mode of building;" figuratively, "arrangement, order," from structus, past participle of struere "to pile, place together, heap up; build, assemble, arrange, make by joining together," related to strues "heap," from PIE *streu-, extended form of root *stere- "to spread."
Related entries & more
rotunda (n.)

"round building," especially one with a dome, 1680s, from Italian rotonda, typically in reference to the Pantheon, the most celebrated building of this kind, from noun use of Latin rotunda, fem. of rotundus "round" (see rotund). Meaning "circular hall or room within a building" is from 1780. 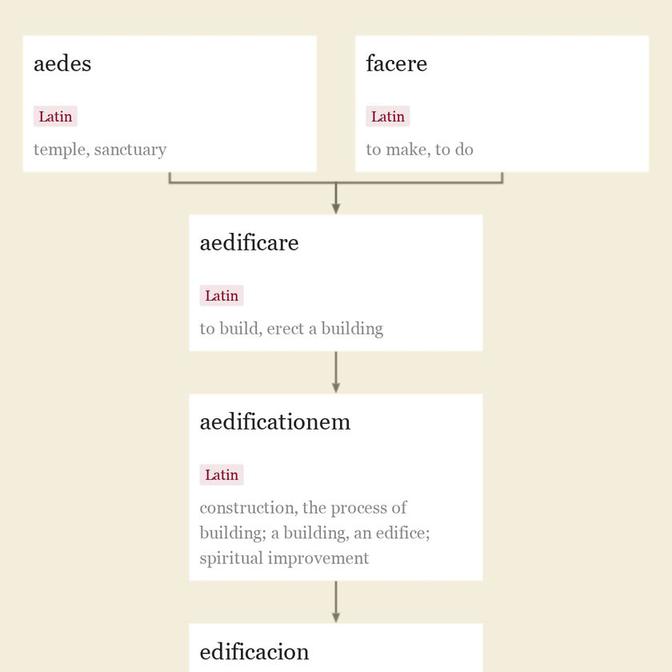 mid-14c., in religious use, "a building up of the soul," from Old French edificacion "a building, construction; edification, good example," and directly from Latin aedificationem (nominative aedificatio) "construction, the process of building; a building, an edifice," in Late Latin "spiritual improvement," from past participle stem of aedificare "to build" (see edifice). Religious use is as translation of Greek oikodome in I Corinthians xiv. Meaning "mental improvement" is 1650s. Literal sense of "building" is rare in English, but Middle English bilding sometimes was used in religious writing to translate Latin aedificatio.
Related entries & more
palazzo (n.)