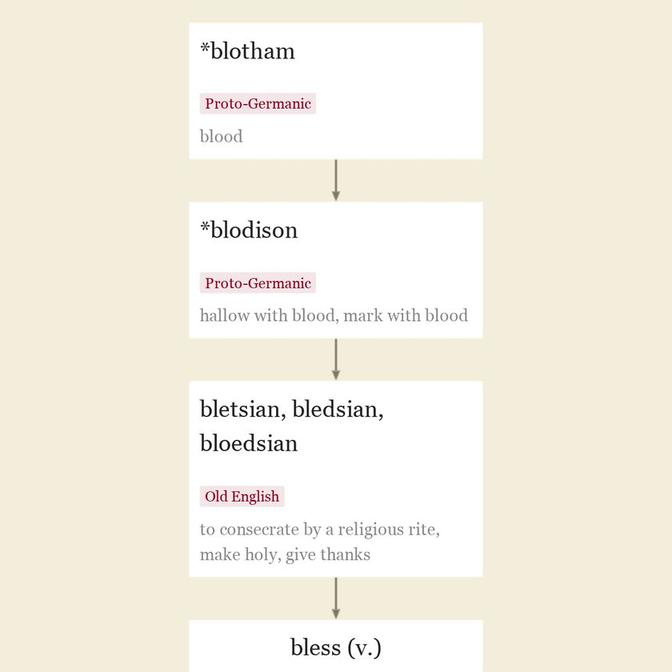 This word was chosen in Old English bibles to translate Latin benedicere and Greek eulogein, both of which have a ground sense of "to speak well of, to praise," but were used in Scripture to translate Hebrew brk "to bend (the knee), worship, praise, invoke blessings." L.R. Palmer ("The Latin Language") writes, "There is nothing surprising in the semantic development of a word denoting originally a special ritual act into the more generalized meanings to 'sacrifice,' 'worship,' 'bless,' " and he compares Latin immolare (see immolate).

The meaning shifted in late Old English toward "pronounce or make happy, prosperous, or fortunate" by resemblance to unrelated bliss. The meaning "invoke or pronounce God's blessing upon" is from early 14c. No cognates in other languages. Related: Blessed; blessing.

alternative (contracted) past tense and past participle of bless.

Middle English blessinge, from Old English bletsunga, bledsunge, "divine grace; protecting influence (of a deity, saint); state of spiritual well-being or joy;" also of a sanction or benediction of the Pope, a priest, etc.; verbal noun from bless. The meaning "a gift from God, that which gives temporal or spiritual benefit" is from mid-14c. In the sense of "religious invocation before a meal" it is recorded from 1738. Phrase blessing in disguise is recorded from 1746.

"to cross oneself; to mark or bless with the sign of the cross," Old English segnian, from Latin signare "to sign, mark, distinguish" (in Church Latin and Medieval Latin "to make the sign of the Cross"); see sign (n.). A common Germanic borrowing, cognate with Old Saxon segnon, Dutch zegenen, Old High German seganon, German segnen "to bless," Old Norse signa. Century Dictionary (1889) marks it "Obsolete or Scotch."

1914, from German Gesundheit, literally "health!", from Old High German gisunt, gisunti "healthy" (see sound (adj.)). Also in the German toast auf ihre Gesundheit "to your health." God bless you after someone sneezes is credited to St. Gregory the Great, but the pagan Romans (Absit omen) and Greeks had similar customs.

fem. proper name, from French Béatrice, from Latin beatrix, fem. of beatricem "who makes happy," from beatus "happy, blessed," past participle of beare "make happy, bless," which is possibly from PIE *dweye-, suffixed form of root *deu- (2) "to do, perform; show favor, revere." De Vaan finds the connection "semantically attractive, but the morphology is unclear."