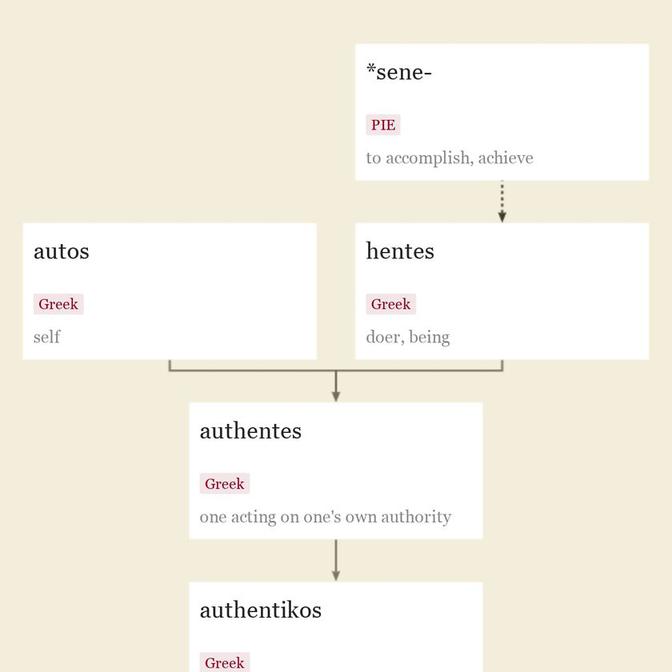 Traditionally in modern use, authentic implies that the contents of the thing in question correspond to the facts and are not fictitious (hence "trustworthy, reliable"); while genuine implies that the reputed author is the real one and that we have it as it left the author's hand (hence "unadulterated"); but this is not always maintained: "The distinction which the 18th c. apologists attempted to establish between genuine and authentic ... does not agree well with the etymology of the latter word, and is not now recognized" [OED].

"to collect and present information from authentic sources, to make or form by putting together in some order written or printed material from various sources," early 14c., from Old French compiler "compile, collect" (13c.) and directly from a Medieval Latin special use of Latin compilare "to plunder, rob," probably originally "bundle together, heap up;" hence "to pack up and carry off," from com "with, together" (see com-) + pilare "to compress, ram down." Related: Compiled; compiling.

Among hundreds of Middle English words it formed are yfallen, yhacked ("completely hacked," probably now again useful), yknow, ymarried, ywrought.
Related entries & more
historic (adj.)
1660s, "of or belonging to history," probably a back-formation from historical, perhaps influenced by French historique. Meaning "what is noted or celebrated in history" is from 1794.

Though both historic and historical have been used in both senses by respected authors, now the tendency is to reserve historic for what is noted or celebrated in history; historical for what deals with history. The earliest adjective form of the word in English was historial (late 14c., from Late Latin historialis), which meant "belonging to history; dealing with history; literal, factual, authentic," and also "of historical importance" (early 15c.).
Related entries & more
Next
Advertisement