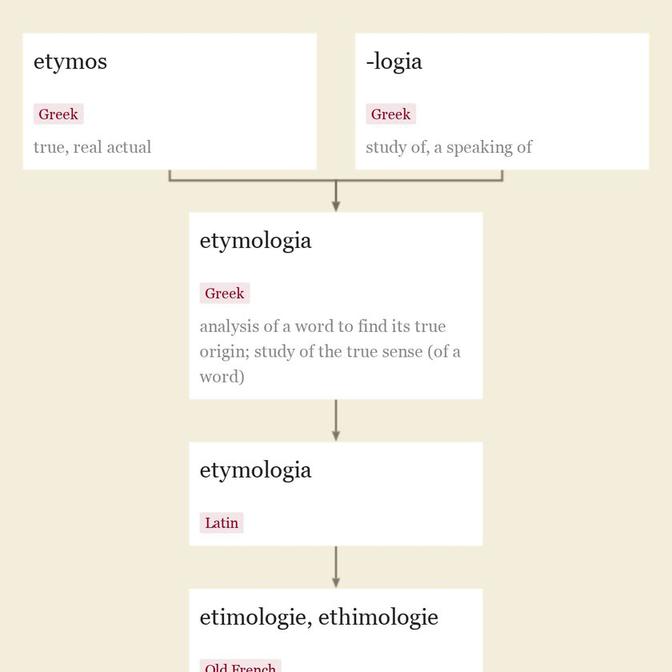 late 14c., ethimolegia "facts of the origin and development of a word," from Old French etimologie, ethimologie (14c., Modern French étymologie), from Latin etymologia, from Greek etymologia "analysis of a word to find its true origin," properly "study of the true sense (of a word)," with -logia "study of, a speaking of" (see -logy) + etymon "true sense, original meaning," neuter of etymos "true, real, actual," related to eteos "true," which perhaps is cognate with Sanskrit satyah, Gothic sunjis, Old English soð "true," from a PIE *set- "be stable." Latinized by Cicero as veriloquium.

In classical times, with reference to meanings; later, to histories. Classical etymologists, Christian and pagan, based their explanations on allegory and guesswork, lacking historical records as well as the scientific method to analyze them, and the discipline fell into disrepute that lasted a millennium. Flaubert ["Dictionary of Received Ideas"] wrote that the general view was that etymology was "the easiest thing in the world with the help of Latin and a little ingenuity."

As a modern branch of linguistic science treating of the origin and evolution of words, from 1640s. As "an account of the particular history of a word" from mid-15c. Related: Etymological; etymologically.

As practised by Socrates in the Cratylus, etymology involves a claim about the underlying semantic content of the name, what it really means or indicates. This content is taken to have been put there by the ancient namegivers: giving an etymology is thus a matter of unwrapping or decoding a name to find the message the namegivers have placed inside. [Rachel Barney, "Socrates Agonistes: The Case of the Cratylus Etymologies," in "Oxford Studies in Ancient Philosophy," vol. xvi, 1998]

By Folk-etymology is meant the influence exercised upon words, both as to their form and meaning, by the popular use and misuse of them. In a special sense, it is intended to denote the corruption which words undergo, owing either to false ideas about their derivation, or to a mistaken analogy with other words to which they are supposed to be related. [The Rev. A. Smythe Palmer, "Folk-Etymology," 1882]

title applied to an adept in Brahmanism, literally "great-souled," from Sanskrit mahatman, from maha "great" (from PIE root *meg- "great") + atman, "soul, principle of life," properly "breath" (see atman). In esoteric Buddhism, "a person of supernatural powers." In common use, as a title, a mark of love and respect. Said to have been applied to Gandhi (1869-1948) in 1915, perhaps by poet Rabrindranath Tagore. The earliest use of the word in English, however, is among the theosophists, who applied it to certain imaginary beings with preternatural powers (1884).

in Greek mythology, the daughter of Minos, king of Crete, abducted by Theseus; from Greek Ariadnē, a name of uncertain etymology, but probably Pre-Greek. Beekes points out that "An IE etymology is improbable for a Cretan goddess."

"study of peace," 1974, from Greek eirēnē "peace" (which is of unknown etymology) + -ology. Related: Irenological.