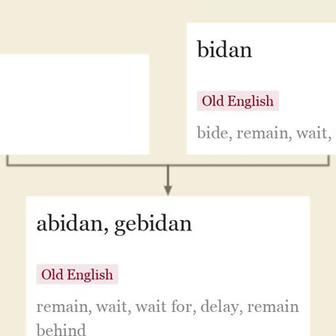 Originally intransitive (with genitive of the object: we abidon his "we waited for him"); transitive sense "endure, sustain, stay firm under," also "tolerate, bear, put up with" (now usually with a negative) is from c. 1200. Related: Abided; abiding. The historical conjugation was abide, abode, abidden, but in Modern English the formation generally is weak. Abide with "stay with (someone); live with; remain in the service of" is from c. 1300.
Related entries & more
Advertisement
abidance (n.)

mid-13c., "action of waiting," verbal noun from abiden "to abide" (see abide). It is formally identical with the old, strong past participle of abide (Old English abad), but the modern conjugation is weak and abided is used. The present-to-preterite vowel change is consistent with an Old English class I strong verb (ride/rode, etc.). Meaning "habitual residence" is first attested 1570s. 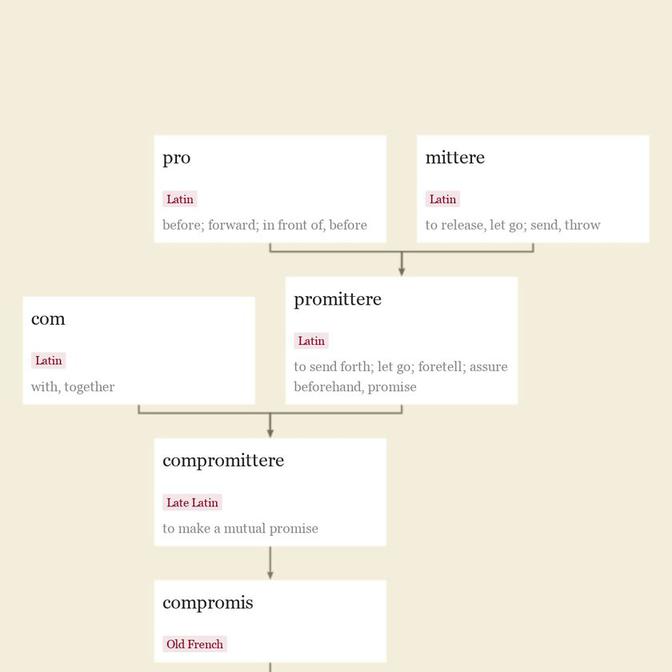 early 15c., "a joint promise to abide by an arbiter's decision," from Old French compromis (13c.), from Late Latin compromissus, past participle of compromittere "to make a mutual promise" (to abide by the arbiter's decision), from com "with, together" (see com-) + promittere "to send forth; let go; foretell; assure beforehand, promise," from pro "before" (from PIE root *per- (1) "forward," hence "in front of, before") + mittere "to release, let go; send, throw" (see mission).

The sense of "a coming to terms, a settlement of differences by mutual concessions" (mid-15c.) is from extension to the settlement itself. The meaning "that which results from such an agreement" is from 1510s.

It is the hypothetical source of/evidence for its existence is provided by: Persian mandan "to remain;" Greek menein "to remain;" Latin manere "to stay, abide."

"to suffer, bear, endure," Old English dreogan "to work, suffer, endure" (see drudge (v.)). Phrase dree one's weird "abide one's fate or destiny" is from 14c. Perhaps from a tendency to be confused with draw, the verb faded from use but lingered in North of England and Scottish dialect and was revived as an archaism by Scott and his imitators.