"in or farther toward the back part (of a ship)," as opposed to forward, 1590s, from Middle English on baft (late 13c.) "back, behind, to the rear," from Old English on bæftan. For first element, see a- (1). The second component is itself a compound of be "by" (see by) and æftan "aft" (see aft). The word has been saved by the sailors (the stern being the "after" part of a vessel), the lubbers having left it in Middle English. 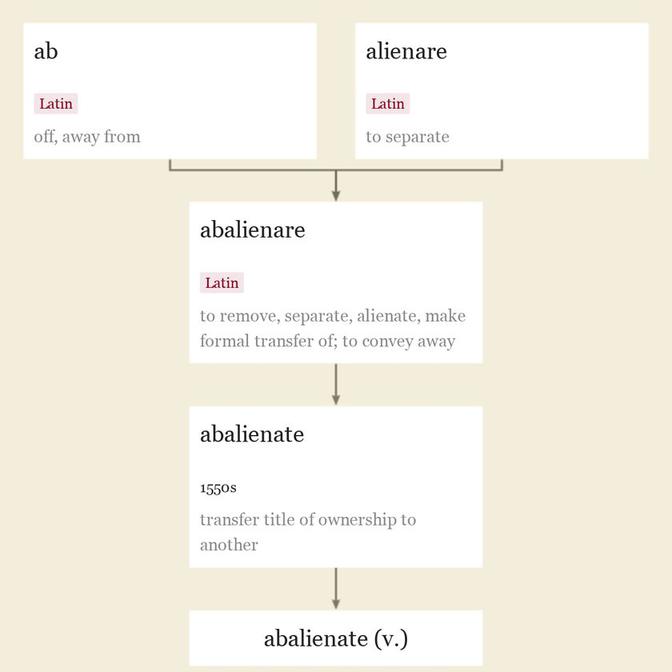 in civil law, "transfer title of ownership to another," 1550s, from Latin abalienatus, past participle of abalienare "to remove, separate, alienate, make formal transfer of," literally "to convey away," from ab "off, away from" (see ab-) + alienare "to separate" (from alius "another, other, different," from PIE root *al- "beyond"). Related: Abalienated; abalienating. 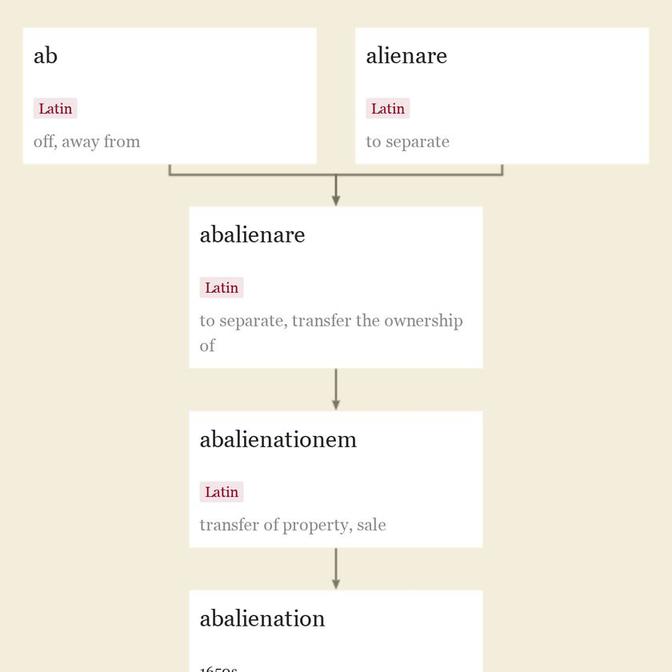 "act of transferring title of ownership," 1650s, from Latin abalienationem (nominative abalienatio), in law, "transfer of property, sale," noun of action from past-participle stem of abalienare "to separate, transfer the ownership of," from ab "off, away from" (see ab-) + alienare "to separate" (from alius "another, other, different," from PIE root *al- (1) "beyond"). 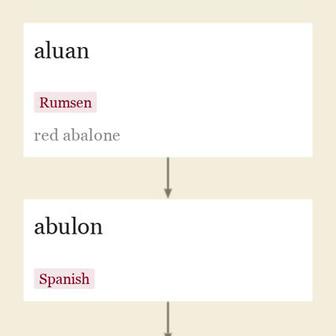 type of large mollusk found on the California coast, 1850, American English, from Spanish abulon, a loan-word from Rumsen (an extinct native language in the Costanoan family), aluan, said to mean "red abalone." Prized for its meat (once an important California export) and for the mother-of-pearl in its large shells (also called ear-shells). 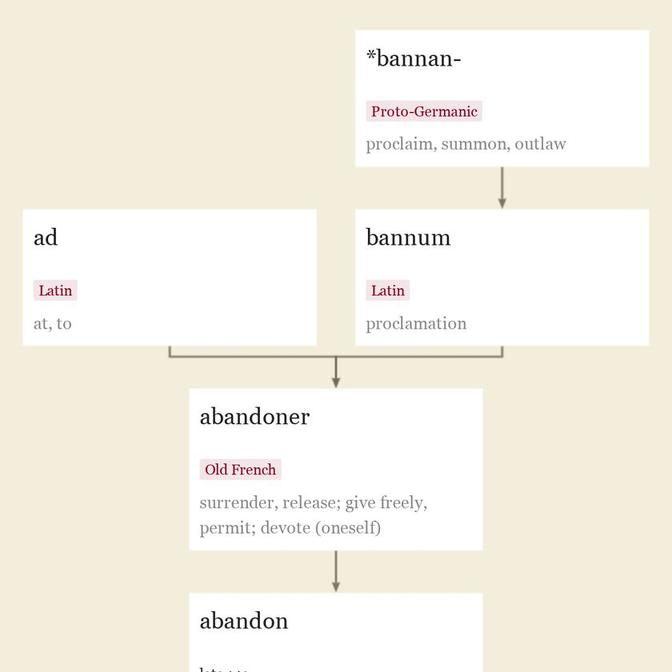 late 14c., "to give up (something) absolutely, relinquish control, give over utterly;" also reflexively, "surrender (oneself), yield (oneself) utterly" (to religion, fornication, etc.), from Old French abandonner "surrender, release; give freely, permit," also reflexive, "devote (oneself)" (12c.).

The Old French word was formed from the adverbial phrase à bandon "at will, at discretion," from à "at, to" (from Latin ad; see ad-) + bandon "power, jurisdiction," from Latin bannum, "proclamation," which is from a Frankish or other Germanic word, from Proto-Germanic *bannan- "proclaim, summon, outlaw" (things all done by proclamation); see ban (v.).

Mettre sa forest à bandon was a feudal law phrase in the 13th cent. = mettre sa forêt à permission, i.e. to open it freely to any one for pasture or to cut wood in; hence the later sense of giving up one's rights for a time, letting go, leaving, abandoning. [Auguste Brachet, "An Etymological Dictionary of the French Language," transl. G.W. Kitchin, Oxford, 1878]

Meaning "to leave, desert, forsake (someone or something) in need" is from late 15c.  Related: Abandoned; abandoning.

Etymologically, the word carries a sense of "put (something) under someone else's control," and the earliest appearance of the word in English is as an adverb (mid-13c.) with the sense "under (one's) control," hence also "unrestricted."

Again, as that which is placed at the absolute command of one party must by the same act be entirely given up by the original possessor, it was an easy step from the sense of conferring the command of a thing upon some particular person to that of renouncing all claim to authority over the subject matter, without particular reference to the party into whose hands it might come ; and thus in modern times the word has come to be used almost exclusively in the sense renunciation or desertion. [Hensleigh Wedgwood, "A Dictionary of English Etymology," 1859]

"a letting loose, freedom from self-restraint, surrender to natural impulses," by 1822 as a French word in English (it remained in italics or quotation marks through much of the 19c.; the naturalized abandonment in this sense was attempted from 1834), from a sense in French abandon "abandonment; permission" (12c.), from abandonner "to surrender, release" (see abandon (v.)).

1610s, "action of relinquishing to another," from French abandonnement (Old French abandonement), from abandonner "to give up" (see abandon (v.)). Meaning "a deserting, forsaking" (of one's family, principles, etc.) is by 1788; from 1839 as "condition of being forsaken." In law, the relinquishing of a title, privilege, or claim. In music, Italian abbandonatamente is the instruction to play so as to make the time subordinate to the feeling.

The form in English was altered 16c. by influence of base (adj.), making the word an exception to the rule that Old French verbs with stem -iss- enter English as -ish (comprehension might have played a role; earlier forms of abase often are identical with those of abash). Literal sense of "lower, depress" (late 15c.) is archaic or obsolete. Related: Abased; abasing.