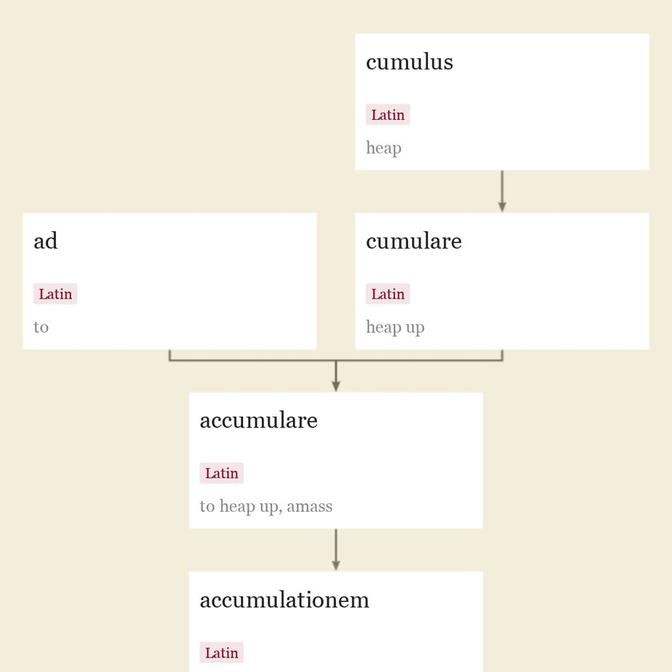 late 15c., "that which is heaped up, an accumulated mass," from Latin accumulationem (nominative accumulatio) "a heaping up," noun of action from past-participle stem of accumulare "to heap up, amass," from ad "to," here perhaps emphatic (see ad-), + cumulare "heap up," from cumulus "heap" (from suffixed form of PIE root *keue- "to swell"). Meaning "act of heaping up" is from c. 1600.

late 14c., "charge of wrongdoing," from Old French acusacion "charge, indictment" (Modern French accusation) or directly from Latin accusationem (nominative accusatio) "formal complaint, indictment," noun of action from past-participle stem of accusare "call to account, make complaint against," from ad causa, from ad "with regard to" (see ad-) + causa "a cause; a lawsuit" (see cause (n.)). Meaning "that which is charged (against someone)" is from early 15c.

grammatical case whose primary function is to express destination or goal of motion, mid-15c., from Anglo-French accusatif, Old French acusatif, or directly from Latin (casus) accusativus "(case) of accusing," from accusatus, past participle of accusare "to call to account, make complaint against" (see accuse).

The Latin word was chosen somewhat inaccurately to translate Greek (ptōsis) aitiatike "(case) of that which is caused" based on the similarity of the Greek word to the Greek verb aitiasthai "to accuse." Greek aitia is the root of both, and means "cause" as well as "accusation," hence the confusion of the Romans. A more correct translation would have been casus causativus. Typically it is the case of the direct object, but also sometimes denoting "motion towards." Nouns and adjectives in French, Spanish, and Italian, languages from which English has borrowed heavily, generally were formed from the accusative case of a Latin word. Related: Accusatival; accusatively.