Advertisement
all
word
name
phrase
suffix
prefix
word root
15 entries found.
withdrawal (n.)
1820s, "act of taking back," also "retraction of a statement," from withdraw + -al (2). Earlier words in the same sense were withdrawment (1640s); withdraught (mid-14c.). Meaning "removal of money from a bank, etc." is from 1861; psychological sense is from 1916; meaning "physical reaction to the cessation of an addictive substance" is from 1929 (with an isolated use from 1897; withdrawal symptom is from 1910). As a synonym for coitus interruptus from 1889.
Related entries & more
Advertisement
subduction (n.)
early 15c., "withdrawal, removal" (originally of noxious substances from the body), from Latin subductionem (nominative subductio) "a withdrawal, drawing up, hauling ashore," noun of action from past participle stem of subducere "to draw away, take away" (see subduce). Geological sense is attested from 1970, from French (1951).
Related entries & more
Brexit (n.)

"withdrawal of the United Kingdom from the European Union," 2012, from Britain + exit.

late 14c., retraccioun, "withdrawal of an opinion," from Latin retractionem (nominative retractio) "a drawing back, hesitation, refusal," noun of action from past-participle stem of retractare "revoke, cancel," from re- "back" (see re-) + tractere "draw violently," frequentative of trahere "to draw" (see tract (n.1)).

Originally the English title of a book by St. Augustine ("Retraciones") correcting his former writings. General sense of "a withdrawal or drawing back" is from early 15c. The meaning "recantation of opinion with admission of error" is from 1540s.

"disposition to withdraw from some combination or union," 1620s, from separate + -ism. Especially in reference to a withdrawal from an established church, or to Church and State; from 1866 in a purely political sense. 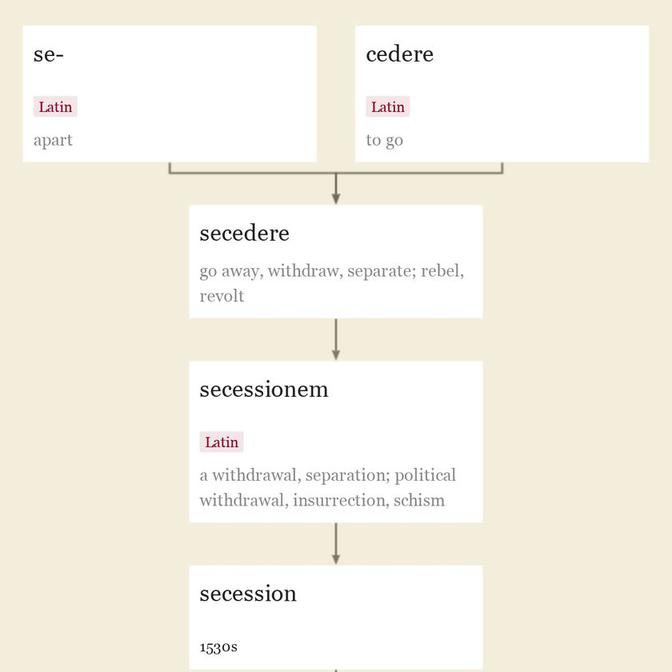 Originally in a Roman historical context, "temporary migration of plebeians from the city to compel patricians to address their grievances." Modern use is by 1650s in reference to "act of withdrawing from a religious or political union."

"act of forsaking or abandoning," 1590s, from French désertion (early 15c.), from Late Latin desertionem (nominative desertio) "a forsaking, abandoning," noun of action from past-participle stem of Latin deserere "to abandon, to leave, forsake, give up, leave in the lurch," from de "undo" (see de-) + serere "join together, put in a row" (from PIE root *ser- (2) "to line up"). In law, "willful withdrawal of one of the married parties from the other without cause or justification." Earlier in astrology, "forsaking or withdrawal of a favorable influence" (mid-15c.).