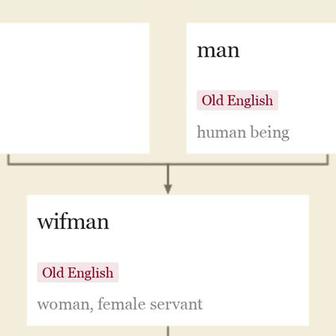 The formation is peculiar to English and Dutch. Replaced older Old English wif and quean as the word for "female human being," as in Jesus's answer to his mother, in Anglo-Saxon gospels la, wif, hwæt is me and þe? (John ii:4 "Woman, what have I to do with thee?").

The pronunciation of the singular altered in Middle English by the rounding influence of -w-; the plural retains the original vowel. Meaning "wife," now largely restricted to U.S. dialectal use, is attested from mid-15c.

The modern sense of the English word is from influence of the Old Norse word. The Middle English adjective is attested from mid-15c. in the sense "of short duration." Related: Stunted; stunting.

"feat to attract attention," 1878, American English college sports slang, of uncertain origin. Speculated to be a variant of colloquial stump "dare, challenge" (1871), or of German stunde, literally "hour." The movie stunt man is attested from 1930.

1912, "ideal woman, woman who seems wonderful or has wonderful qualities," from wonder (n.) + woman. The comic book superheroine debuted in DC Comics in 1941.

"sensational chauvinism in the media," 1898, American English, from newspaper agitation for war with Spain; originally "publicity stunt use of colored ink" (1895) in reference to the popular Yellow Kid" character (his clothes were yellow) in Richard Outcault's comic strip "Shantytown" in the "New York World."

1791, "state or condition of being public or open to the observation and inquiry of a community," from French publicité (1690s), from Medieval Latin publicitatem (nominative publicitas), from Latin publicus (see public (adj.)). Sense of "a making (something) known, an exposure to the public" is from 1826, shading by c. 1900 into "advertising, the business of promotion." Publicity stunt is recorded by 1908.

late 14c., "womanly, feminine; resembling a woman;" of a man or men, "behaving in the manner of a woman, effeminate," from woman + -ish. Related: Womanishly; womanishness.

late 14c., "condition of being a woman," also "qualities or characteristics considered natural to a woman," from woman + -hood. Meaning "women collectively" is attested from 1520s.