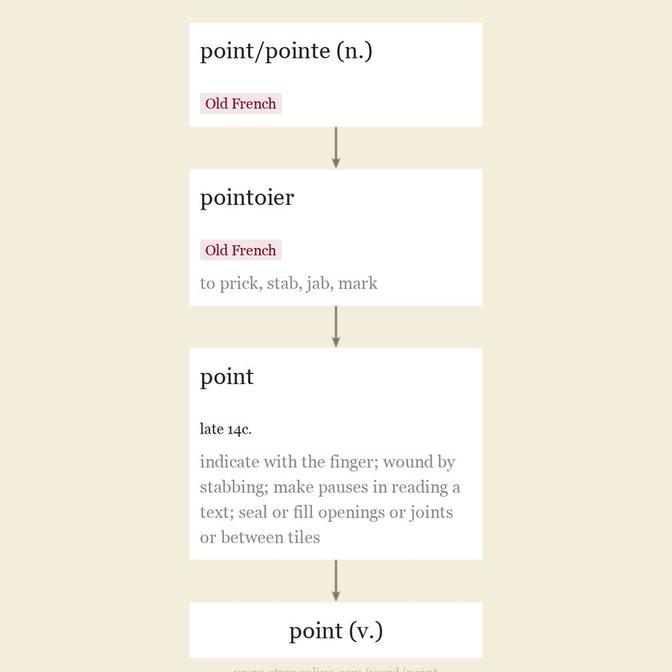 1570s, in gunnery, "having a horizontal direction," said to be from point (v.) + blank (n.), here meaning the white center of a target. The notion would be of standing close enough to aim (point) at the blank without allowance for curve, windage, or gravity.

But early references make no mention of a white target, and the phrase is possibly from a simplification of the French phrase de pointe en blanc, used in French gunnery in reference to firing a piece on the level into open space to test how far it will carry. In that case the blank represents "empty space" or perhaps the "zero point" of elevation. The whole phrase might be a French loan-translation from Italian.

From 1590s as an adjective in English. The transferred meaning "direct, blunt, straight, without circumlocution" is from 1650s.

"position from which a thing is or is supposed to be viewed," 1727, translating French point de vue, a loan-translation of Latin punctum visus. Figurative use "state of mind, predisposition (conscious or not)" is from 1760. The Latin phrase was translated into German as Gesichtspunkt.

1859, name of a method (developed by J.Y. Simpson) of stopping surgical bleeding by pinning or wiring the artery shut, from Latin acus "a needle" (from PIE root *ak- "be sharp, rise (out) to a point, pierce") + pressure (n.). From 1958 in reference to the oriental body therapy also known as shiatsu (said to mean literally "finger-pressure" in Japanese).