late 14c., in church music, a composition said or sung after the Alleluia and before the Gospel, from Old French sequence "answering verses" (13c.) and directly from Medieval Latin sequentia "a following, a succession," from Latin sequentem (nominative sequens), present participle of sequi "to follow" (from PIE root *sekw- (1) "to follow").

In Church use, a partial loan-translation of Greek akolouthia, from akolouthos "following." By 1570s in the general sense of "a series of things following in a certain order, a succession," also in cards, "a run of three or more consecutive numbers of the same suit." By 1580s as "order of succession." In biochemistry in reference to nucleic acids, by 1959.

"that follows as a sequence, being in succession," 1816, from Late Latin sequentia (see sequence) + -al (1). Related: Sequentially.

It is the hypothetical source of/evidence for its existence is provided by: Sanskrit sacate "accompanies, follows;" Avestan hacaiti, Greek hepesthai "to follow;" Latin sequi "to follow, come after," secundus "second, the following;" Lithuanian seku, sekti "to follow;" Old Irish sechim "I follow." 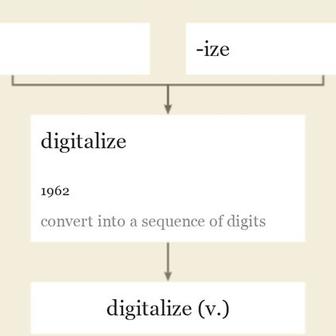 "convert into a sequence of digits," 1962, from digital + -ize. Related: Digitalized; digitalizing.

early 15c., "attainment;" 1530s, "proceeding in argument from one proposition to another in logical sequence," from Latin consecutionem (nominative consecutio), noun of action from past-participle stem of consequi "to follow after," from assimilated form of com "with, together" (see con-) + sequi "to follow" (from PIE root *sekw- (1) "to follow"). Meaning "any succession or sequence" is from 1650s.

late 14c., "disorder, confusion, condition of being out of regular order," from dis- "opposite of" + array (n.) "order, arrangement, sequence," or perhaps from Old French desarroi.