From late 14c. as "release from duty or obligation." Of diseases, fevers, "abatement, temporary subsidence," from early 15c. General sense of "diminution of force or effects" is from c. 1600. By 1736 as "abatement of penalty or punishment."

Meaning "relief from hard work or ordinary cares; a state or occupation intended to give mental or bodily relief after effort or ordinary occupations and cares" is from 1540s. Sense of "remission or abatement of rigor or intensity" is from 1690s.

"act of pardoning a wrong act," 1620s, from Latin condonationem (nominative condonatio) "a giving away," noun of action from past-participle stem of condonare "to give up, remit, permit," from assimilated form of com-, here perhaps an intensive prefix (see con-), + donare "give as a gift" (from donum "gift," from PIE root *do- "to give").

Condonation is the remission of a matrimonial offence known to the remitting party to have been committed by the other; on the condition subsequent that ever afterward the party remitting shall be treated by the other with conjugal kindness. [Joel Prentiss Bishop, "Commentaries on the Law of Marriage and Divorce," 1864] 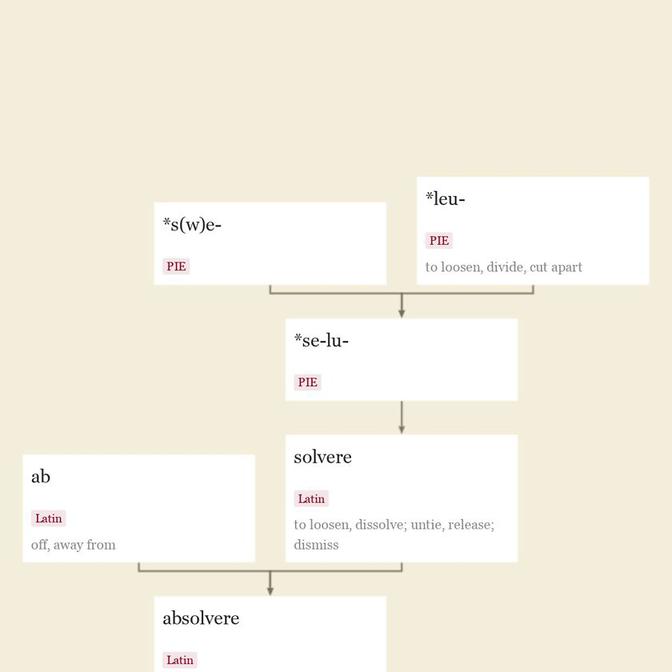 Related entries & more
indulgence (n.)
mid-14c., in the Church sense, "a freeing from temporal punishment for sin, remission from punishment for sin that remains due after absolution," from Old French indulgence or directly from Latin indulgentia "complaisance, a yielding; fondness, tenderness, affection; remission," from indulgentem (nominative indulgens) "indulgent, kind, tender, fond," present participle of indulgere "be kind; yield, concede, be complaisant; give oneself up to, be addicted," a word of uncertain origin. It is evidently a compound, and the second element appears to be from PIE root *dlegh- "to engage oneself, be or become fixed." The first element could be in- "in" for a sense of "let someone be engaged" in something, or in- "not" for a total sense of "not be hard toward" someone.

Sense of "leniency, forbearance of restraint or control of another, gratification of desire or humor" is attested from late 14c. That of "yielding to one's inclinations" (technically self-indulgence) in English is from 1630s. In British history, Indulgence also refers to grants of certain liberties to Nonconformists under Charles II and James II, as special favors rather than legal rights. The sale of indulgences in the original Church sense was done at times merely to raise money and was widely considered corrupt; the one in 1517 helped to spark the Protestant revolt in Germany.
Related entries & more
Advertisement
release (n.)

early 14c., relēs, "abatement of distress; means of deliverance," from Old French relais, reles (12c.), a back-formation from relesser, relaissier "to relinquish, quit, let go, leave behind, abandon, acquit" (see release (v.)). In law, mid-14c., "transferring of property or a right to another;" late 14c. as "release from an obligation; remission of a duty, tribute, etc."

In archery, the meaning "act and manner of releasing" (a bow, etc.) is from 1871. The sense of "action of publication" is from 1907; as "a news item or official statement (to the press)" is by 1927. The meaning "action of making a film available to theaters" is from 1912, later of musical recordings, etc. The sense of "written authorization or permission for publication" is by 1965.

The notion is of "ending" (by satisfying) something that is due (compare Greek telos "end;" plural tele "services due, dues exacted by the state, financial means"). The French senses gradually were brought into English: "ransom" (mid-15c.), "taxation" (late 15c.); the sense of "management of money, science of monetary business" first recorded in English 1770.
Related entries & more
relay (n.)

late 14c., in hunting, relai, "hounds placed along a line of chase" (to replace those that tire), from Old French relais "reserve pack of hounds or other animals; rest, stop, remission, delay" (13c.), from relaier "to exchange tired animals for fresh," literally "leave behind," from re- "back" (see re-) + laier "leave, let."

This is perhaps a variant of Old French laissier, (compare Old French relaisser "release"), from Latin laxare "slacken, undo" (see lax (adj.)). But Watkins has it from Frankish *laibjan, from a Proto-Germanic causative form of PIE root *leip- "to stick, adhere."

The etymological sense is "to leave (dogs) behind (in order to take fresh ones)." Of horses, 1650s. As "a squad of men to take a spell or turn of work at stated intervals," by 1808. As a type of foot-race, it is attested from 1898. The electromagnetic instrument is attested by name from 1860, originally in telegraphy. 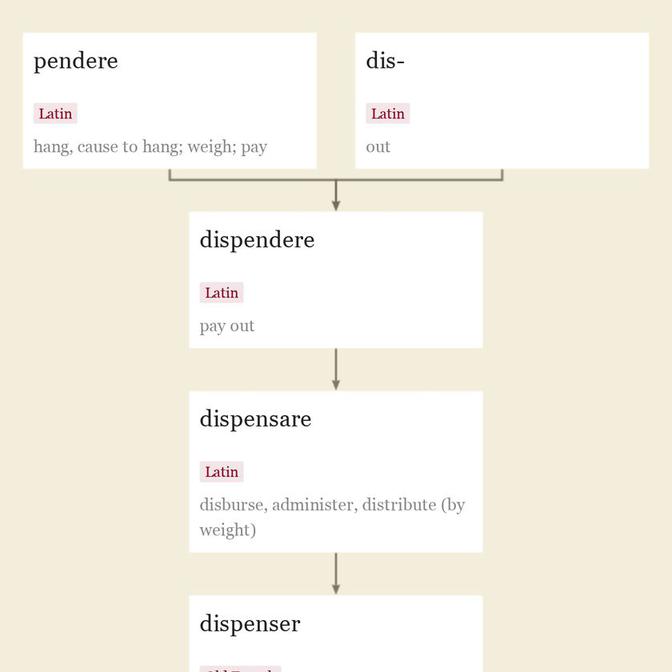 In Medieval Latin, dispendere was used in the ecclesiastical sense of "grant licence to do what is forbidden or omit what is required" (a power of popes, bishops, etc.), and thus acquired a sense of "grant remission from punishment or exemption from law," hence the use of the English verb in the senses "to do away with" (1570s), "do without" (c. 1600). The older sense is preserved in dispensary. Related: Dispensed; dispensing.

c. 1300, relēsen, "to withdraw, revoke (a decree, etc.), cancel, lift; remit," from Old French relaissier, relesser "to relinquish, quit, let go, leave behind, abandon, acquit," variant of relacher "release, relax," from Latin relaxare "loosen, stretch out" (from re- "back" (see re-) + laxare "loosen," from PIE root *sleg- "be slack, be languid"). Latin relaxare is the source also of Spanish relajar, Italian relassare, and English relax, and the uncle of relish.

Meaning "alleviate, ease" is mid-14c., as is sense of "set free from (duty, etc.); exonerate." From late 14c. as "grant remission, forgive; set free from imprisonment, military service, etc." Also "give up, relinquish, surrender." In law, c. 1400, "to grant a release of property." Of press reports, attested from 1904; of motion pictures from 1912; of music recordings from 1962. As a euphemism for "to dismiss, fire from a job" it is attested in American English since 1904. Related: Released; releasing.