late 14c., receit, "act of receiving;" also "statement of ingredients in and formula for making a potion or medicine" (compare recipe); from Anglo-French or Old North French receite "receipt, recipe, prescription" (c. 1300), altered (by influence of receit "he receives," from Vulgar Latin *recipit) from Old French recete. This is from Medieval Latin Latin recepta "thing or money received," in classical Latin "received," fem. past participle of recipere "to hold, contain" (see receive).

The classical -p- began to be restored in the English word after c. 1500, but the pronunciation did not follow. Conceit, deceit, and receipt all are from Latin capere; the -p- sometimes was restored in all three of them, but it has stuck only in the last. The meaning "written acknowledgment for having received something specified" is from c. 1600.

1580s, "medical prescription, a formula for the composing of a remedy written by a physician," from French récipé (15c.), from Latin recipe "take!" (this or that ingredient), second person imperative singular of recipere "to hold, contain" (see receive). It was the word written by physicians at the head of prescriptions. Figurative meaning "a prescribed formula" is from 1640s. Meaning "instructions for preparing a particular food" is recorded by 1716. The older sense in English survives chiefly in the pharmacist's abbreviation Rx. Compare receipt.

c. 1300, receiven, "take into one's possession, accept possession of," also in reference to the sacrament, from Old North French receivre (Old French recoivre) "seize, take hold of, pick up; welcome, accept," from Latin recipere "regain, take back, bring back, carry back, recover; take to oneself, take in, admit," from re- "back," though the exact sense here is obscure (see re-) + -cipere, combining form of capere "to take" (from PIE root *kap- "to grasp").

1610s, "small piece of paper with writing on it, a written slip," apparently a corruption of script (n.). In the commercial use, "a certificate of a right to receive something" (especially a stock share), 1762, in this sense probably shortened from (sub)scrip(tion) receipt (see subscription). Originally "receipt for a portion of a loan subscribed;" the meaning "certificate issued as currency" is recorded by 1790. In U.S. history, "fractional paper money" (by 1889).

"one in receipt of a pension or regular allowance," late 15c., from Anglo-French pensionner, from Old French pensionnier (mid-14c.), from Medieval Latin pensionarius, from pension "a payment" (see pension (n.)).

1520s, originally "summoning of a person into court to warrant the title to a property, a calling to vouch;" see vouch. Meaning "receipt from a business transaction" is first attested 1690s; sense of "document which can be exchanged for goods or services" is attested from 1947.

"to pay a regular salary to," late 15c. (Caxton), from salary (n.). Related: Salaried "in receipt of a fixed salary" (c. 1600), which as an adjective in reference to positions originally was contrasted with honorary ("without pay"); from 20c. with hourly ("paid by the hour").

1610s (n.) "one who receives profits or advantages," 1620s (adj.) "connected with the receipt of profits or advantages," probably via French bénéficiaire, from Latin beneficiarius "enjoying a favor, privileged," from beneficium "a favor, service, generosity, kindness, benefit," from beneficus "generous, kind, benevolent, obliging," from bene- "good, well" (see bene-) + -ficus "making, doing," from -ficere, combining form of facere "to do, to make" (from PIE root *dhe- "to set, put").

1795, "warehouse or storehouse for receiving goods for storage, sale, or transfer," from French dépôt "a deposit, place of deposit," from Old French depost "a deposit or pledge," from Latin depositum "a deposit," noun use of neuter past participle of deponere "lay aside, put down," from de "away" (see de-) + ponere "to put, place" (past participle positus; see position (n.)).

Military sense of "fort where stores, ammunition, etc. are deposited" is from 1798; meaning "railway station, building for accommodation and shelter of passengers and the receipt and transfer of freight" is attested by 1842, American English. 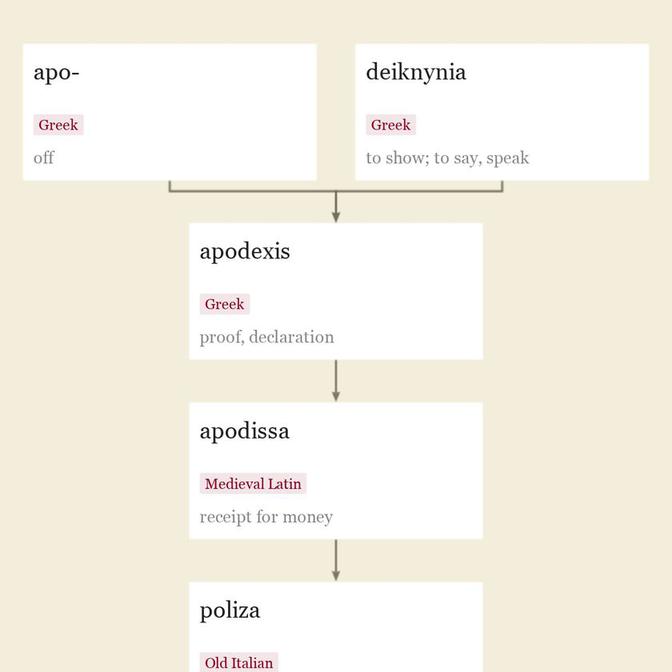 ["written insurance agreement"], 1560s, "written contract to pay a certain sum on certain contingencies," from French police "contract, bill of lading" (late 14c.), from Italian polizza "written evidence of a transaction, note, bill, ticket, lottery ticket," from Old Italian poliza, which, according to OED, is from Medieval Latin apodissa "receipt for money," from Greek apodexis "proof, declaration," from apo- "off" + deiknynai "to show," cognate with Latin dicere "to say, speak" (from PIE root *deik- "to show," also "pronounce solemnly"). Also formerly a form of gambling, "the numbers game" (by 1830).