"act or fact of pretending in imagination or play," 1888, from children's talk, from pretend (v.). Earlier in same sense was the verbal noun pretending (1640s).

Old English wolde, past tense and past subjunctive of willan "to will" (see will (v.)). Would-be (adj.) "wishing to be, vainly pretending" is first recorded c. 1300. 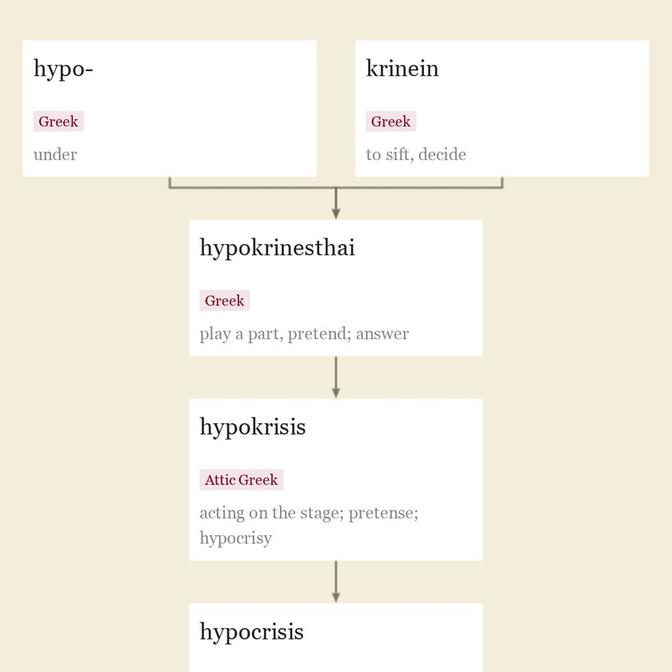 Said to be so called from "the manner of its flight" [OED] "in reference to its irregular flapping manner of flight" [Barnhart], but the lapwing also flaps on the ground pretending to have a broken wing to lure egg-hunters away from its nest, which seems a more logical explanation. Its Greek name was polyplagktos "luring on deceitfully."

late 14c., pretenden, "to profess, put forward as a statement or assertion, maintain" (a claim, etc.), "to direct (one's) efforts," from Old French pretendre "to lay claim," from Latin praetendere "stretch in front, spread before, put forward; put forward as an excuse, allege," from prae "before" (see pre-) + tendere "to stretch" (from PIE root *ten- "to stretch").

Main modern sense of "feign, use as a pretext, put forward a false claim" is recorded from c. 1400; the older sense of simply "lay claim to" is behind the royal pretenders (1690s) in English history (see pretender). Meaning "to play, make believe" is recorded from 1865. In 17c. pretend also could mean "make a suit of marriage for," from a sense in French. Related: Pretended; pretending.

name for certain heretics, late 14c., also Loller, from Middle Dutch lollaerd, a word applied pejoratively to members of semi-monastic reforming sects active in the Low Countries from c. 1300 who devoted themselves to the care of the sick and poor. The Dutch word means literally "mumbler, mutterer, one who mutters prayers and hymns," from lollen "to mumble or doze."

They were so called by critics who saw in them heretics pretending to humble piety, from lollen "to mumble or doze." In transferred use it became the generic late Middle English term for groups suspected of heresy, especially followers of John Wyclif. Related: Lollardism (the modern word); Lollardy (the old one).

"figure of speech in which the intended meaning is the opposite of the literal meaning" (usually covert sarcasm under a serious or friendly pretense), c. 1500, from Latin ironia, from Greek eironeia "dissimulation, assumed ignorance," from eiron "dissembler," perhaps related to eirein "to speak," from PIE *wer-yo-, suffixed form of root *were- (3) "to speak" (see verb). Used in Greek of affected ignorance, especially that of Socrates, as a method of exposing an antagonist's ignorance by pretending to modestly seek information or instruction from him. Thus sometimes in English in the sense "simulated ignorance."

For nuances of usage, see humor (n.). In early use often ironia. Figurative use for "condition opposite to what might be expected; contradictory circumstances; apparent mockery of natural or expected consequences" is from 1640s, sometimes distinguished as irony of fate or irony of circumstances. Related: Ironist. A verb ironize "speak ironically" is recorded from c. 1600.

According to Middle English Compendium, two sets of Latin stems "seem to have fallen together" in Medieval Latin: ser- (as in series, serere) and sēr- (as in sērius, sēriōsus, etc.), perhaps through semantic overlap, which accounts for the earlier Middle English record of the word, which seems to belong to the first stem.

As "in earnest, not pretending or jesting," from 1712; in reference to of music, theater, etc., "dealing with grave matters" by 1762. The meaning "attended with danger, giving grounds for alarm" is from 1800. Serious-minded is attested by 1845.