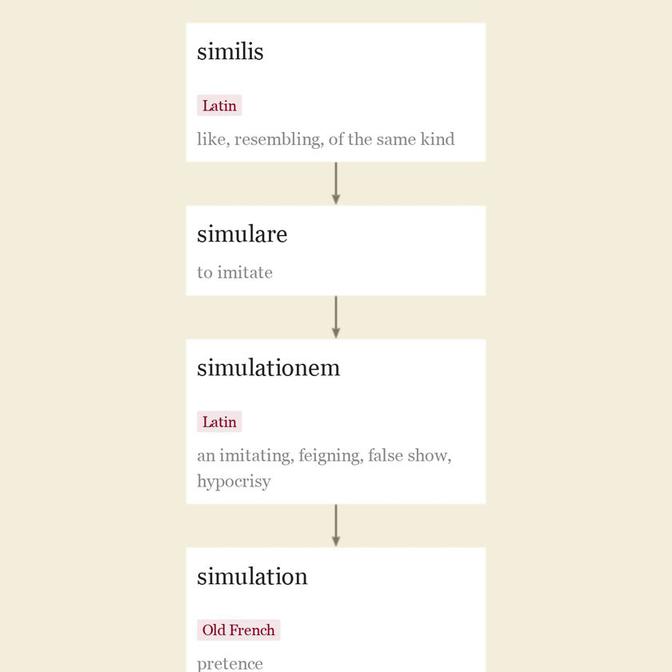 mid-14c., simulacioun, "a false show, false profession," from Old French simulation "pretence" and directly from Latin simulationem (nominative simulatio) "an imitating, feigning, false show, hypocrisy," noun of action from past-participle stem of simulare "imitate," from stem of similis "like, resembling, of the same kind" (see similar). The meaning "a model or mock-up for purposes of experiment or training" is from 1954.

also pretence, early 15c., "the putting forth of a claim; false or hypocritical profession, feigning, disguise, that under cover of which an actual design or meaning is concealed," also "a stated ground or reason, an assertion of a legal right," from Anglo-French pretensse(Modern French prétense), from Medieval Latin pretensio, noun of action from Late Latin praetensus, altered from Latin praetentus, past participle of praetendere  "stretch in front, put forward; allege" (see pretend (v.)).

Meaning "forbearance, sufferance" is from 1580s. The specific religious sense is from 1609; as in Act of Toleration (1689), statute granting freedom of religious worship (with conditions) to dissenting Protestants in England. In this it means "recognition of the right of private judgment in matters of faith and worship; liberty granted by the government to preach and worship as one pleases; equality under the law without regard to religion."

If any man err from the right way, it is his own misfortune, no injury to thee; nor therefore art thou to punish him in the things of this life because thou supposest he will be miserable in that which is to come. Nobody, therefore, in fine, neither single persons nor churches, nay, nor even commonwealths, have any just title to invade the civil rights and worldly goods of each other upon pretence of religion. [John Locke, "Letter Concerning Toleration," 1689]