"the science of quantity; the abstract science which investigates the concepts of numerical and spatial relations," 1580s; see mathematic (the older form of the word in English, attested from late 14c.) + -ics. Originally one of three branches of Aristotelian theoretical science, along with first philosophy (or metaphysics) and physics (or natural philosophy).

Mystical doctrines as to the relation of time to eternity are also reinforced by pure mathematics, for mathematical objects, such as numbers, if real at all, are eternal and not in time. Such eternal objects can be conceived as God's thoughts. [Bertrand Russell, "A History of Western Philosophy"]

"the metaphysics of mathematics," including the philosophy of non-Euclidian geometry, 1878, from meta- in the sense of "transcending, overarching, dealing with the most fundamental matters of" + mathematics. Related: Metamathematical.

American English shortening of mathematics, 1890; the British preference, maths, is attested from 1911. "Math. is used as an abbreviation in written English in the U.K. but not in speech, the normal form being Maths" [OED].

As an adjective, "pertaining to mathematics," from c. 1400, from French mathématique or directly from Latin mathematicus. 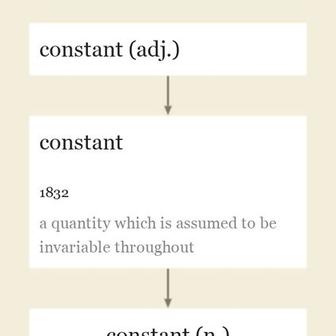 1832 in mathematics and physics, "a quantity which is assumed to be invariable throughout," from constant (adj.), which is attested from 1753 in mathematics. The general sense "that which is not subject to change" (1856) is a figurative extension from this.