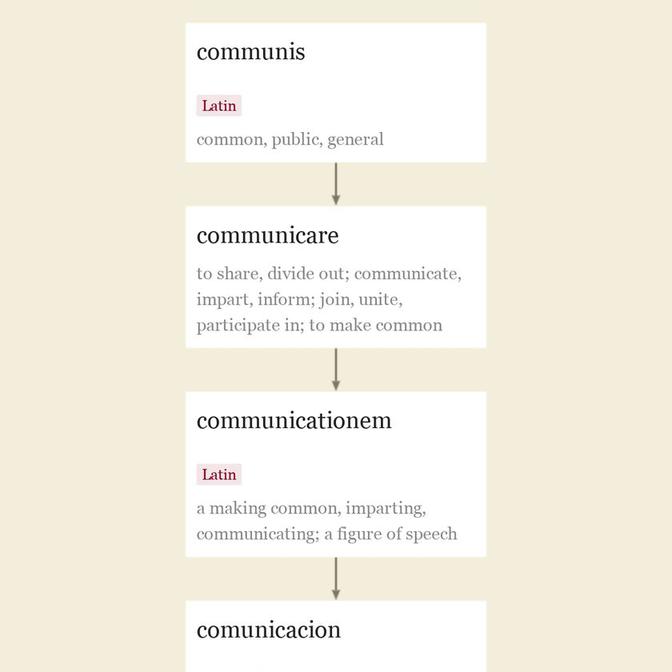 "of or pertaining to the study of language," 1824, from German linguistisch (1807); see linguist + -ic. The use of linguistic to mean "of or pertaining to language or languages" (1847) is "hardly justifiable etymologically," according to OED, but "has arisen because lingual suggests irrelevant associations." Related: Linguistical; linguistically.

To the science which may be formed by comparing languages, the term Linguistic has been applied by some German authors. It is not, however, generally adopted, and is liable to some objections. ["Biblical Repository," vol. vii, no. 21, Jan. 1836]

"a secondary communication that takes place with, or underlies, a more obvious communication," 1951, from meta- in the third sense of "transcending, overarching, dealing with the most fundamental matters of" + communication.

"system of communication using gestures," especially for communication with and among the deaf, by 1847; see sign (n.). Earlier hand-language (1670s).

late 14c., "infectious disease; contaminated condition;" from Old French infeccion "contamination, poisoning" (13c.) and directly from Late Latin infectionem (nominative infectio) "infection, contagion," noun of action from past participle stem of Latin inficere "to spoil, to stain" (see infect). Meaning "communication of disease by agency of air or water" (distinguished from contagion, which is body-to-body communication), is from 1540s.

1801 of the mountains; 1850 as an ethnic and linguistic family (comprising Turkish, etc.), from French Altaïque, from Altaïen, from Altai, name of a mountain range in Asia between Russia and China, a name of uncertain origin.