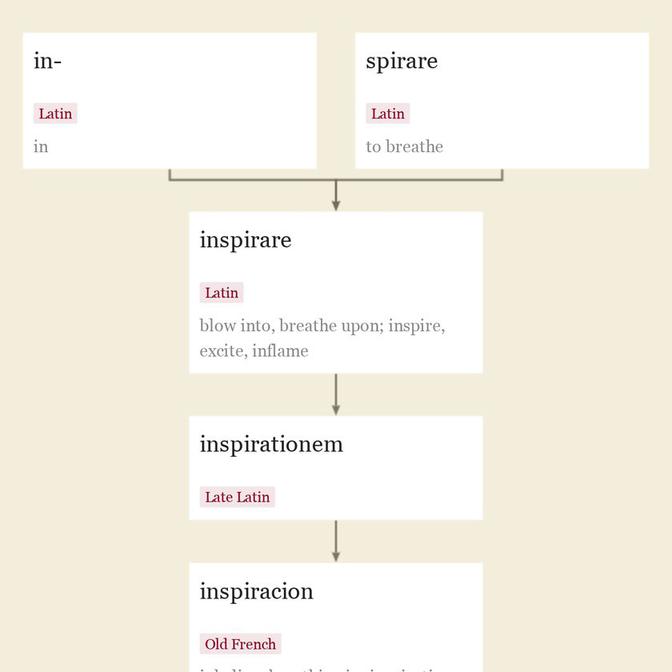 Latin adverbial phrase, used with reference to literary or artistic creation, "without inspiration," literally "Minerva unwilling;" i.e. "without inspiration from the goddess of wisdom;" ablative fem. of invitus "against the will, unwilling, reluctant," according to de Vaan from PIE compound *n-uih-to- "not turned to, not pursuing," related to the source of invitation. With Minervā, ablative absolute of Minerva.

1871, "intellectuality," also, variously, after German, "spirit" of a place or time; "spirituality," from German Geist (see ghost (n.), and compare zeitgeist). A German word for "enthusiasm, rapture; inspiration" is begeisterung.

fount on Mount Helicon sacred to the Muses, its waters were held to bestow poetic inspiration, from Greek Hippokrene, earlier hippou krene, literally "horse's fountain," from genitive of hippos "horse" (from PIE root *ekwo- "horse") + krēnē "fountain," which is of uncertain origin.

"made or composed by piecing together existing parts," by 1938 with reference to trick photographs; see cut (v.) + paste (v.). By 1959 with reference to doing things with haste, carelessness, or lack of inspiration.

mountain in Boeotia, sacred to the Muses, on which arose the fountains of Aganippe and Hippocrene, 1520s, from Latinized form of Greek Helikon, literally "the tortuous mountain," from helix (genitive helikos) "spiral," from PIE root *wel- (3) "to turn, revolve." Used allusively in reference to poetic inspiration. Related: Heliconian.

1660s, member of the Protestant sect founded c. 1651 by English tailor Lodowicke Muggleton (1609-1698) and John Reeve. Members believed in the prophetic inspiration of the two founders as being the two witnesses mentioned in Revelation xi.3-6. Members were still living in the 1860s.