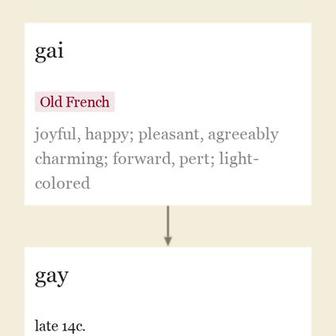 The meaning "stately and beautiful; splendid and showily dressed" is from early 14c. Of things, "sumptuous, showy, rich, ornate," mid-14c. of colors, etc., "shining, glittering, gleaming, bright, vivid," late 14c.; of persons, "dressed up, decked out in finery," also late 14c. In the English of Yorkshire and Scotland formerly it could mean "moderately, rather, considerable" (1796; compare the sense development in pretty (adj.)).

The word gay by the 1890s had an overall tinge of promiscuity — a gay house was a brothel. The suggestion of immorality in the word can be traced back at least to the 1630s, if not to Chaucer:

The slang meaning "homosexual" (adj.) begins to appear in psychological writing in the late 1940s, evidently picked up from gay slang and not always easily distinguished from the older sense:

Quoting a tramp named Frenchy, who might not have known the origin. Gay cats were severely and cruelly abused by "real" tramps and bums, who considered them "an inferior order of beings who begs of and otherwise preys upon the bum — as it were a jackal following up the king of beasts" [Prof. John J. McCook, "Tramps," in "The Public Treatment of Pauperism," 1893], but some accounts report certain older tramps would dominate a gay cat and employ him as a sort of slave. In "Sociology and Social Research" (1932-33) a paragraph on the "gay cat" phenomenon notes, "Homosexual practices are more common than rare in this group," and gey cat "homosexual boy" is attested in Noel Erskine's 1933 dictionary of "Underworld & Prison Slang" (gey is a Scottish variant of gay).

"bunch of flowers used to delight the sense of smell," late 15c., from nose (n.) + gay in an obsolete noun sense of "gay or bright thing."

a Scottish variant of gay (compare gray/grey), used 18c.-19c. also with the Scottish sense of "considerable, pretty much, considerably."

"cheerfulness, mirth," 1630s, from French gaieté (Old French gaiete, 12c.), from gai "gay" (see gay). In the 1890s, in Britain, especially with reference to a London theater of that name, and the kind of musical shows and dancing girls it presented.

also gayly, "with mirth and frolic," late 14c., from Middle English gai (see gay) + -ly (2). "The spelling gaily is the more common, and is supported by the only existing analogy, that of daily" [OED].