late 14c., "fierce passion," from Old French furie, fuire "rage, frenzy" (14c.), from Latin furia "violent passion, rage, madness," from or related to furere "to rage, be mad," which is of uncertain origin. "Many etymologies have been proposed, but none is clearly the best" [de Vaan]. Romans used Furiæ to translate Greek Erinyes, the collective name for the avenging deities sent from Tartarus to punish criminals (in later accounts three in number and female). Hence, in English, figuratively, "an angry woman" (late 14c.). 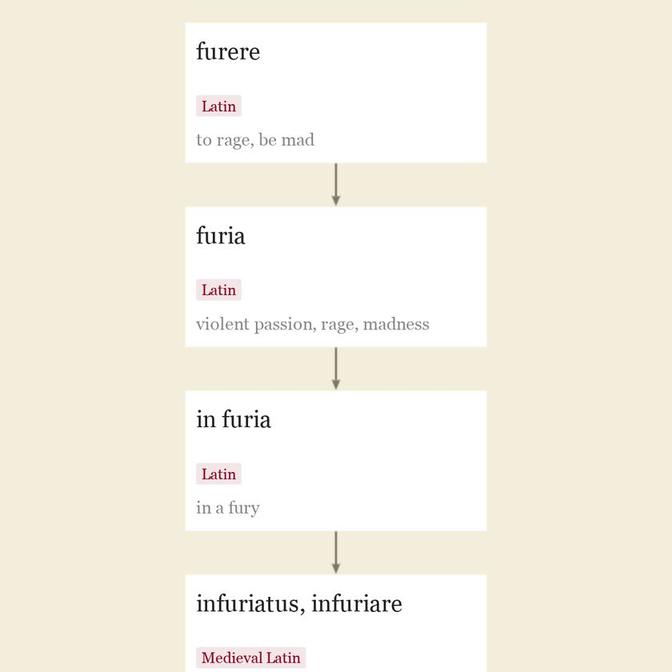 1660s, from Italian infuriato, from Medieval Latin infuriatus, past participle of infuriare "to madden, enrage," from Latin in furia "in a fury," from ablative of furia (see fury). Also from 1660s as an adjective in English, but this use is rare. Related: Infuriated; infuriating.

It is attested from late 14c. in the sense of "fit of carnal lust or sexual desire." In 15c.-16c. it also could mean "rabies." Other Middle English senses, now obsolete, include "come to a boil; grieve, mourn, lament; flirt, make love." The rage "fashion, vogue" dates from 1785.

early 15c., "physical weakness," also "poverty," from Old French impotence "weakness" (13c.), from Latin impotentia "lack of control or power," from impotentem "lacking control, powerless" (see impotent). In reference to a complete want of (male) sexual potency, from c. 1500. The figurative senses of the word in Latin were "violence, fury, unbridled passion," via the notion of "want of self-restraining power," and these sometimes were used in English. Related: Impotency.

type of European flowering plant, 1550s, from Latin alysson, from Greek alysson, which is perhaps the neuter of adjective alyssos "curing madness," from a- "not, without" (see a- (3)) + lyssa "madness, martial rage, fury," an abstract word probably literally "wolf-ness" and related to lykos "wolf" (see wolf (n.)); but some see a connection with "light" words, in reference to the glittering eyes of the mad.