all
word
name
phrase
suffix
prefix
word root
6 entries found.
fag (v.1)
"to droop, decline in strength, become weary" (intransitive), 1520s, of uncertain origin; OED is content with the "common view" that it is an alteration of flag (v.) in its sense of "droop, go limp." Transitive sense of "to make (someone or something) fatigued, tire by labor" is first attested 1826. Related: Fagged; fagging.
Related entries & more
fag (n.1)
British slang for "cigarette" (originally, especially, the butt of a smoked cigarette), 1888, probably from fag "loose piece, last remnant of cloth" (late 14c., as in fag-end "extreme end, loose piece," 1610s), which perhaps is related to fag (v.), which could make it a variant of flag (v.).
Related entries & more
fag (v.2) 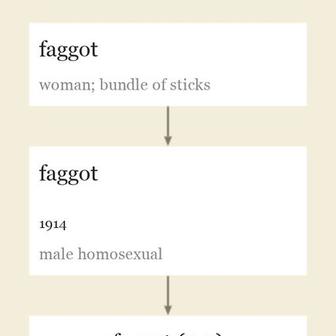