"to take or cull out" a passage in a written or printed work, "select, cite, extract," early 15c. (implied in excerpte), from Latin excerptus, past participle of excerpere "pluck out, pick out, extract," figuratively "choose, select, gather," also "to leave out, omit," from ex "out" (see ex-) + carpere "pluck, gather," from PIE root *kerp- "to gather, pluck, harvest." Related: Excerpted; excerpting.

"an extract from a written or printed work," 1630s, from Latin excerptum "an extract, selection," noun use of neuter past participle of excerpere "to extract" (see excerpt (v.)). Related: excerpts.

As an adverb, "hardly, scarcely," early 14c., from the adjective. Phrase make (oneself) scarce "go away, leave at once," is attested by 1771, noted then as a current cant phrase. Related: Scarcely. 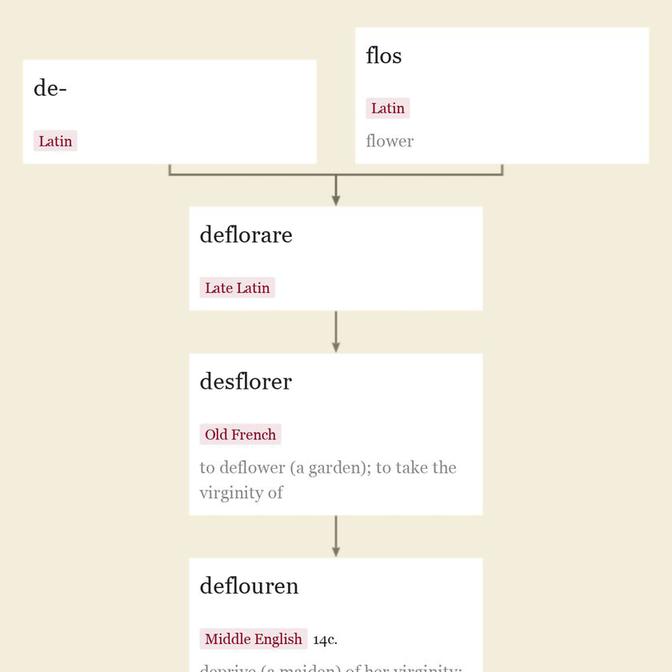 late 14c., deflouren, "deprive (a maiden) of her virginity," also "excerpt the best parts of (a book)," from Old French desflorer (13c., Modern French déflorer) "to deflower (a garden); to take the virginity of" and directly from Late Latin deflorare, from de- (see de-) + flos "flower" (from PIE root *bhel- (3) "to thrive, bloom"). Sense of "despoil of beauty or grace" is from late 15c. The notion is "to strip of flowers," or of the quality or character of a flower, thus "to ravish."

The French Indians are said not to have deflowered any of our young women they captivated. [James Adair, "The Life of an Indian Trader," London, 1775]

early 15c., trophe, "an overwhelming victory;" 1510s, "a spoil or prize of war," from Old French trophée (15c.) from Latin trophaeum "a sign of victory, monument," originally tropaeum, from Greek tropaion "monument of an enemy's defeat," noun use of neuter of adjective tropaios "of defeat, causing a rout," from trope "a rout," originally "a turning" (of the enemy); from PIE root *trep- "to turn."

In ancient Greece, spoils or arms taken in battle and set up on the field and dedicated to a god. Figurative extension to any token or memorial of victory is first recorded 1560s. As "a symbolic representation of a classical trophy" from 1630s.

Trophy wife "a second, attractive and generally younger, wife of a successful man who acquires her as a status symbol" was a trending phrase in media from 1988 ("Fortune" magazine did a cover story on it in 1989), but is older in isolated instances.

Variations on this theme ['convenience-wife'] include the HOSTESS-WIFE of a businessman who entertains extensively and seeks  a higher-level, home-branch version of his secretary; the TROPHY-WIFE — the woman who was hard to get because of birth or wealth or beauty — to be kept on exhibition like a mammoth tusk or prime Picasso ... [Phyllis I. Rosenteur, excerpt from "The Single Women," published in Philadelphia Daily News, Dec. 12, 1961]

The excerpt distinguishes the trophy wife from the "showcase wife," "chosen for her pulchritude and constantly displayed in public places, dripping mink and dangling diamonds," which seems more to suit the later use of trophy wife.