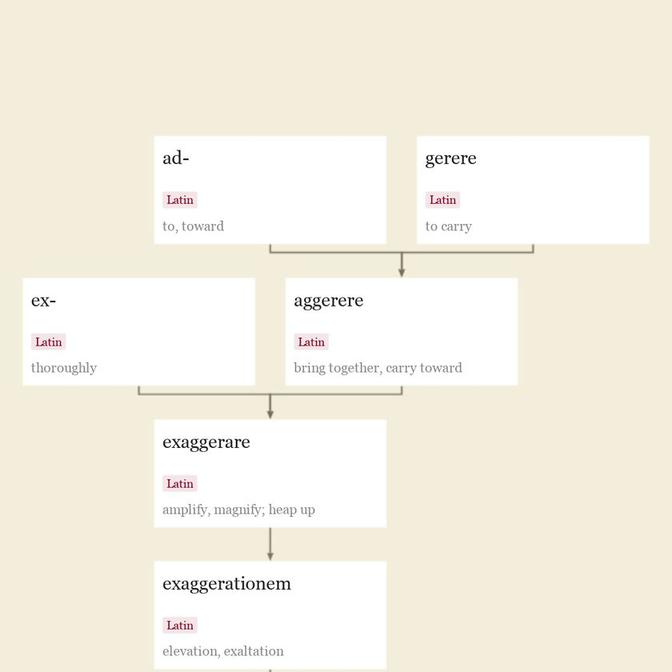 "obvious exaggeration in rhetoric," early 15c., from Latin hyperbole, from Greek hyperbole "exaggeration, extravagance," literally "a throwing beyond," from hyper- "beyond" (see hyper-) + bole "a throwing, a casting, the stroke of a missile, bolt, beam," from bol-, nominative stem of ballein "to throw" (from PIE root *gwele- "to throw, reach"). Rhetorical sense is found in Aristotle and Isocrates. Greek had a verb, hyperballein, "to throw over or beyond."

early 15c., "normality," from natural (adj.) + -ness. From 1650s as "state of being natural," also "conformity to nature; absence of artificiality, exaggeration, or affectation."

"grotesque or ludicrous representation of persons or things by an absurd exaggeration of what is characteristic," 1748 (figurative), 1750 (literal), from French caricature (18c.), from Italian caricatura "satirical picture; an exaggeration," literally "an overloading," from caricare "to load; exaggerate," from Vulgar Latin *carricare "to load a wagon or cart," from Latin carrus "two-wheeled wagon" (see car). The Italian form had been used in English from 1680s and was common 18c.

A representation, pictorial or descriptive, in which beauties or favorable points are concealed or perverted and peculiarities or defects exaggerated, so as to make the person or thing represented ridiculous, while a general likeness is retained. [Century Dictionary]

From c. 1500 as "fear so great as to overwhelm the mind." Meaning "quality of causing dread" is attested from 1520s. Sense of "a person fancied as a source of terror" (often with deliberate exaggeration, as of a naughty child) is recorded from 1883. Terror bombing first recorded 1941, with reference to German air attack on Rotterdam. Terror-stricken is from 1831. The Reign of Terror in French history (March 1793-July 1794) was the period when the nation was ruled by a faction whose leaders made policy of killing by execution anyone deemed an impediment to their measures; so called in English from 1801. Old English words for "terror" included broga and egesa.

1530s, "freedom from exaggeration, self-control," from French modestie or directly from Latin modestia "moderation, sense of honor, correctness of conduct," from modestus "moderate, keeping due measure, sober, gentle, temperate," from modus "measure, manner" (from PIE root *med- "take appropriate measures"). Meaning "quality of having a moderate opinion of oneself, retiring demeanor, disinclination to presumption, unobtrusiveness" is from 1550s; that of "womanly propriety, purity or delicacy of thought or manner" is from 1560s.

In euery of these thinges and their semblable is Modestie; whiche worde nat beinge knowen in the englisshe tonge, ne of al them which under stode latin, except they had radde good autours, they improprely named this vertue discretion. [Sir Thomas Elyot, "The Boke Named The Gouernour," 1531]

The pride which masks as modesty is the most perverse of all. [Marcus Aurelius]

one of the most etymologically complex of English place names, it illustrates the changes wrought in Old English words by Anglo-French scribes who could not pronounce them. Recorded 1016 as Scrobbesbyrig, it originally may have meant "the fortified place in (a district called) The Scrub." The initial consonant cluster was impossible for the scribes, who simplified it to sr-, then added a vowel (sar-) to make it easier still.

The name also changed due to Anglo-French loss or metathesis of liquids in words containing -l-, -n-, or -r- (also evident in the derivatives of Old French Berengier "bear-spear" — Old High German Beringar — name of one of the paladins in the Charlemagne romances and a common given name in England 12c. and 13c., which has come down in surnames as Berringer, Bellanger, Benger, etc.). Thus Sarop- became Salop- and in the 12c. and 13c. the overwhelming spelling in government records was Salopesberie, which accounts for the abbreviation Salop for the modern county.

During all this, the Anglo-Saxon inhabitants (as opposed to the French scribes) still pronounced it properly, and regular sound evolutions probably produced a pronunciation something like Shrobesbury (which turns up on a 1327 patent roll). After a predictable -b- to -v- (a vowel in the Middle Ages) to -u- shift, the modern spelling begins to emerge 14c. and is fully established 15c. A Shrewsbury clock (1 Hen. IV) for some reason, became proverbial for exactness, and thus, naturally, proverbial as indicating exaggeration of accuracy.