c. 1300, "act or fact of physically entering; place of entrance, means of entering a building; opportunity or right of entering; initiation or beginning of an action;" from Old French entree "entry, entrance" (12c.), noun use of fem. past participle of entrer "to enter" (see enter). Meaning "that which is entered or set down (in a book, list, etc.)" is from c. 1500.

also reentry, mid-15c., reentre, "act of entering again," from re- "again" + entry; probably on model of Old French rentree. Originally especially of the right to resume possession of lands or estates; specifically of spacecraft returning through the atmosphere from 1948. Re-entering as a noun is from 1630s; re-entrance (1901) was introduced as a technical term.

mid-15c., reentren, "to enter (a place) again or anew," from re-, denoting "repetition of an action," + enter. By 1838 in reference to an account or record. Related: Re-entered; re-entering.

also doormat, "heavy mat placed before a door for use in cleaning the shoes by those entering," 1660s, from door + mat. Figurative use in reference to persons people "walk all over" or upon whom they (figuratively) clean their boots is by 1861. 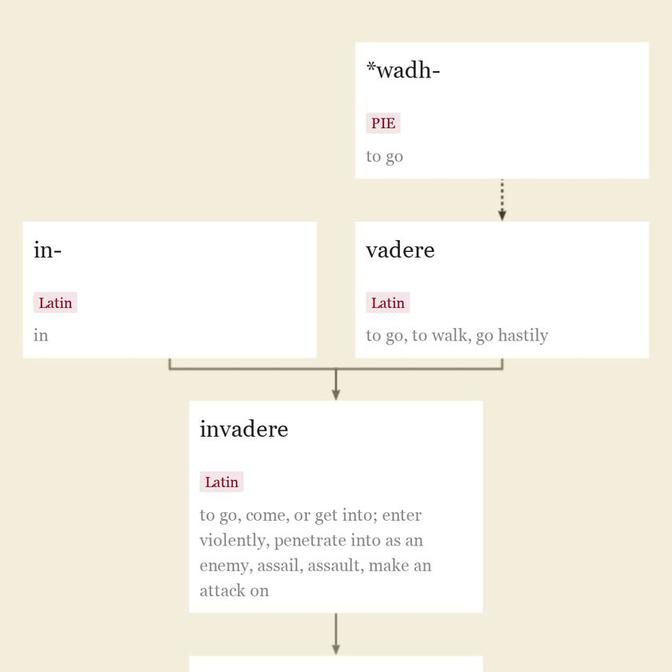 mid-15c., invasioun, "an assault, attack, act of entering a country or territory as an enemy," from Old French invasion "invasion, attack, assault" (12c.), from Late Latin invasionem (nominative invasio) "an attack, invasion," noun of action from past-participle stem of Latin invadere "to go, come, or get into; enter violently, penetrate into as an enemy, assail, assault, make an attack on," from in- "in" (from PIE root *en "in") + vadere "to go, to walk, go hastily," from PIE root *wadh- (2) "to go" (source also of Old English wadan "to go," Latin vadum "ford;" see wade (v.)).

In extended sense, of diseases, "a harmful incursion of any kind;" with reference to rights, etc., "infringement by intrusion, encroachment by entering into or taking away what belongs to another."

1724, "opening piece of an opera or ballet," from French entrée, from Old French entree (see entry). Cookery sense is from 1759; originally the dish which was introductory to the main course. Meaning "entry, freedom of access" is from 1762. The word had been borrowed in Middle English as entre "act of entering."

"to shut out, debar from admission or participation, prevent from entering or sharing," mid-14c., from Latin excludere "keep out, shut out, hinder," from ex "out" (see ex-) + claudere "to close, shut" (see close (v.)). Related: Excluded; excluding.