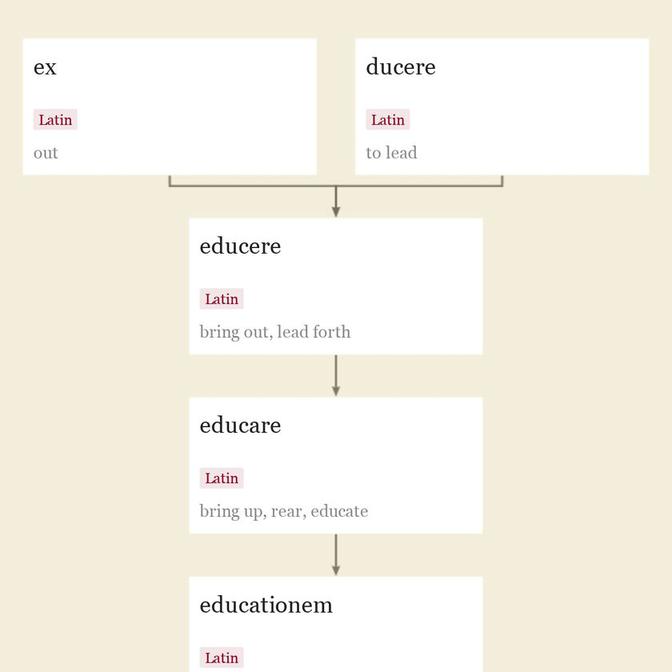 1530s, "child-rearing," also "the training of animals," from French education (14c.) and directly from Latin educationem (nominative educatio) "a rearing, training," noun of action from past-participle stem of educare (see educate). Originally of instruction in social codes and manners; meaning "systematic schooling and training for work" is from 1610s.

also muckraker, c. 1600, "one who rakes muck" (earliest use is in a figurative sense: "a miser"), from muck-rake "rake for scraping muck or filth" (mid-14c.), from muck (n.) + rake (n.). The figurative meaning "one who inquires into and publishes scandal and allegations of corruption among political and business leaders" was popularized 1906 in speech by President Theodore Roosevelt, in reference to the "man ... with a Muckrake in his hand" in Bunyan's "Pilgrim's Progress" (1684) who seeks worldly gain by raking filth.

The men with the muck-rakes are often indispensable to the well-being of society, but only if they know when to stop raking the muck. [T. Roosevelt, quoted in "Cincinnati Enquirer," April 15, 1906.]

British political party, 1657, in part perhaps a disparaging use of whigg "a country bumpkin" (1640s); but mainly a shortened form of Whiggamore (1649) "one of the adherents of the Presbyterian cause in western Scotland who marched on Edinburgh in 1648 to oppose Charles I." Perhaps originally "a horse drover," from dialectal verb whig "to urge forward" + mare. In 1689 the name was first used in reference to members of the British political party that opposed the Tories. American Revolution sense of "colonist who opposes Crown policies" is from 1768. Later it was applied to opponents of Andrew Jackson (as early as 1825), and taken as the name of a political party (1834) that merged into the Republican Party in 1854-56.

[I]n the spring of 1834 Jackson's opponents adopted the name Whig, traditional term for critics of executive usurpations. James Watson Webb, editor of the New York Courier and Enquirer, encouraged use of the name. [Henry] Clay gave it national currency in a speech on April 14, 1834, likening "the whigs of the present day" to those who had resisted George III, and by summer it was official. [Daniel Walker Howe, "What Hath God Wrought," 2007, p.390]

Whig historian is recorded from 1924. Whig history is "the tendency in many historians ... to emphasise certain principles of progress in the past and to produce a story which is the ratification if not the glorification of the present." [Herbert Butterfield, "The Whig Interpretation of History," 1931]