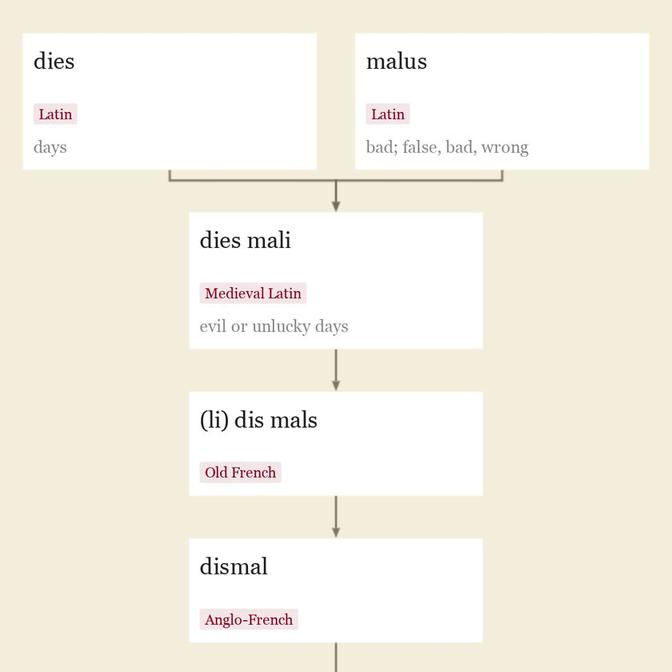 By 1580s the English word had been extended to "gloomy, dreary, cheerless," and was used to describe physical surroundings, sounds, or anything else felt as tending to depress the spirits. In North America, it was the name given along the seacoast and sounds around North Carolina to tracts of swampy land and dead trees (1763). The dismal science (1849) was Carlyle's name for "political economics." Related: Dismally.

"suitable for a funeral" (mournful, dismal, gloomy), 1725, from stem of Latin funereus "of a funeral," from funus "funeral; death" (see funeral) + -al (1). Perhaps by influence of French funerail.

The derivation from Greek akhos "woe" is considered folk etymology. The name later was given to certain rivers in Greece and Italy because they flowed through dismal surroundings or disappeared underground and were thought to be gateways to the Underworld. Related: Acherontic.

The word has lost its original sense and the notion of "dripping blood." Sense of "lonesomely dismal, gloomy" first recorded 1667 in "Paradise Lost," but Old English had a related verb drysmian "become gloomy." Weakened sense of "causing a feeling of tedium, tiresomely monotonous" is by 1871. Related: Drearily.

also mawkin, late 13c., a jocular or contemptuous term for a servant-woman or kitchen-servant, a woman of the lower classes, or a slattern, a loose woman; from the fem. proper name Malkyn, a diminutive of Mault "Maud" (see Matilda). It also is attested from c. 1200 as the proper name of a female specter. Sense of "untidy woman" probably led to the extended meaning "mop, bundle of rags on a stick" (used to clean ovens, artillery pieces, etc.), c. 1400.

Attested as the name of a cat since 1670s (earlier as Grimalkin, late 16c.); compare Serbo-Croatian mačka "cat," originally a pet-name form of Maria. Also used in Scotland and northern England as the name of a hare (1724).

MALKINTRASH. One in dismal garb. [Grose, "Classical Dictionary of the Vulgar Tongue," London, 1785]