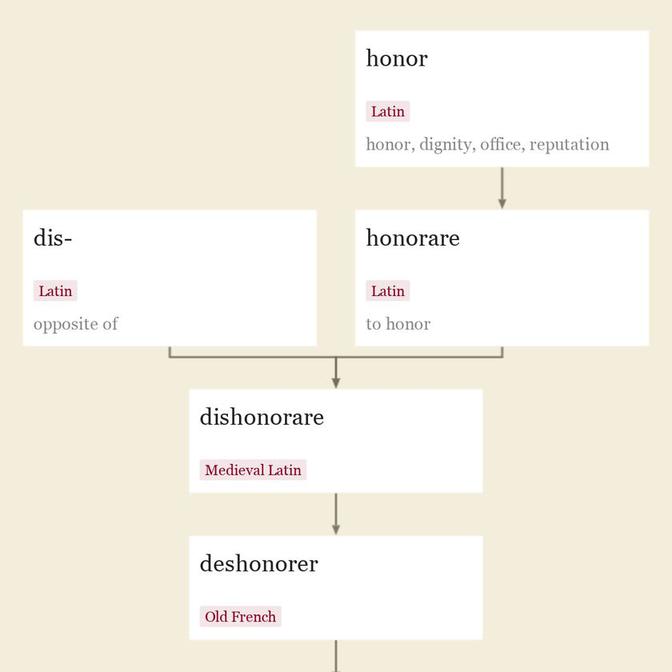 c. 1300, "want of honor in conduct; state of being disgraced; a violation of one's honor or dignity," from Old French deshonor (12c., Modern French déshonneur), from deshonorer (see dishonor (v.)). Meaning "a cause or source of shame" is from 1550s.

An earlier form in Middle English was infame (late 14c.), from Old French infame, an earlier form of infamie. Infame also was the Middle English verb in this set, "brand with infamy," from Old French infamer, from Latin infamare "bring into ill repute, defame," from infamis. The verb has become archaic in English (infamize is attested from 1590s).

late 14c., "degrade socially" (for marrying below rank or without proper ceremony), from Anglo-French and Old French desparagier (Modern French déparager) "reduce in rank, degrade, devalue, depreciate," originally "to marry unequally, marry to one of inferior condition or rank," and thus, by extension, to bring on oneself or one's family the disgrace or dishonor involved in this, from des- "away" (see dis-) + parage "rank, lineage" (see peer (n.)).

Also from late 14c. as "injure or dishonor by a comparison," especially by treating as equal or inferior to what is of less dignity, importance, or value. Sense of "belittle, undervalue, criticize or censure unjustly" is by 1530s. Related: Disparaged; disparaging; disparagingly.

mid-15c., "do an injustice to, dishonor," probably a back-formation from injury, or else from Old French injuriier "to damage; offend," from Latin iniuriari "do an injury," from iniuria. Injury itself also served as a verb meaning "to injure, hurt, harm" (late 15c.). Related: Injured; injuring.