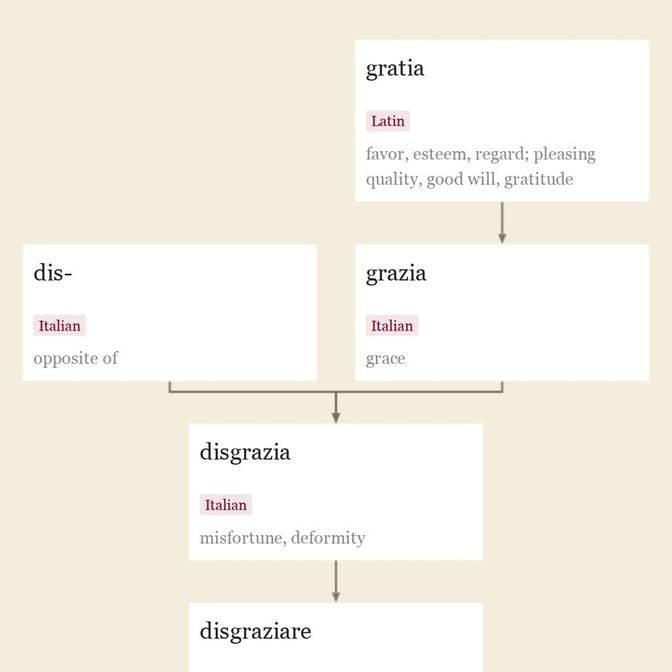 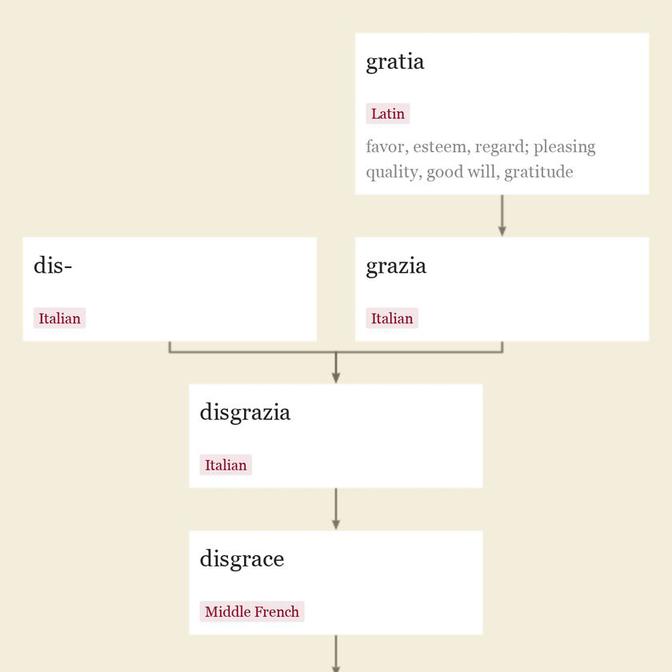 1580s, "state of being out of favor of one in a powerful or exalted position;" also "cause of shame or reproach;" 1590s, "state of ignominy, dishonor, or shame," from French disgrace (16c.), from Italian disgrazia, from dis- (see dis-) + grazia, from Latin gratia "favor, esteem, regard; pleasing quality, good will, gratitude" (see grace (n.)).

mid-14c., reproche, "a rebuke, blame, censure" directed against a person; also "object of scorn or contempt;" c. 1400, as "disgrace, state of disgrace," from Anglo-French repruce, Old French reproche "blame, shame, disgrace" (12c.), from reprochier "to blame, bring up against."

OED cites Diez for the explanation that this is from Vulgar Latin *repropiare, from Latin re- "opposite of" + prope "near" (see propinquity), with suggestions of "bring near to" as in modern get in (someone's) face. But it points out other etymologists of French would have it from *reprobicare, from Latin reprobus/reprobare "disapprove, reject, condemn" (see reprobate (adj.)).

"act of putting (someone) to shame or reproach; state of disgrace," late 14c., verbal noun from shame (v.).

1540s, "to disgrace," of uncertain origin. Perhaps a Scottish respelling of bauchle "to disgrace publicly" (especially a perjured knight), which is probably related to French bafouer "to abuse, hoodwink" (16c.), possibly from baf, a natural sound of disgust, like bah (compare German baff machen "to flabbergast"). The original sense is obsolete. The meaning "defeat someone's efforts, frustrate by interposing obstacles or difficulties" is from 1670s. Related: Baffled; baffling.

Also in Middle English "nakedness, private parts, the genitals," as in the Wycliffite Bible's shameful thingis for Latin verecundiora. and shamfast membris for the male genitalia.

Until modern times English had a productive duplicate form in shand. An Old Norse word for it was kinnroði, literally "cheek-redness," hence, "blush of shame." Greek distinguished shame in the bad sense of "disgrace, dishonor" (aiskhynē) from shame in the good sense of "modesty, bashfulness" (aidos).