"first appearance in public or before society," 1751, from French début "first appearance," a figurative use from débuter "make the first stroke at billiards," also "to lead off at bowls" (a game akin to bowling), 16c., from but "mark, goal," from Old French but "end" (see butt (n.3)). The verb is first attested 1830. Related: Debuted; debuting.

Début can only be pronounced as French, and should not be used by anyone who shrinks from the necessary effort. [Fowler]

1824, "male performer or speaker making his first public appearance," from French debutant, noun use of present participle of débuter "to make the first strike" (in billiards, etc.), from debut (see debut).

1801, "female stage actress making her first public performance," from fem. of French debutant, noun use of present participle of débuter "to make the first strike" (in billiards, etc.), from debut (see debut). In reference to a young woman making her first appearance in society, from 1817.

(plural shmoon), comic strip creature, a fabulous animal ready to fulfill man's wants, 1948; invented by U.S. cartoonist Al Capp (Alfred Caplin, 1909-1979); the name perhaps based on schmoe. It was a U.S. fad for a couple of years after its debut.

1935, as visual equivalent of audio, from Latin video "I see," first person singular present indicative of videre "to see" (see vision). As a noun, "that which is displayed on a (television) screen," 1937.

Engineers, however, remember the sad fate of television's first debut and are not willing to allow "video transmission" (as television is now called by moderns) to leave the laboratory until they are sure it will be accepted. [The Michigan Technic, November 1937] 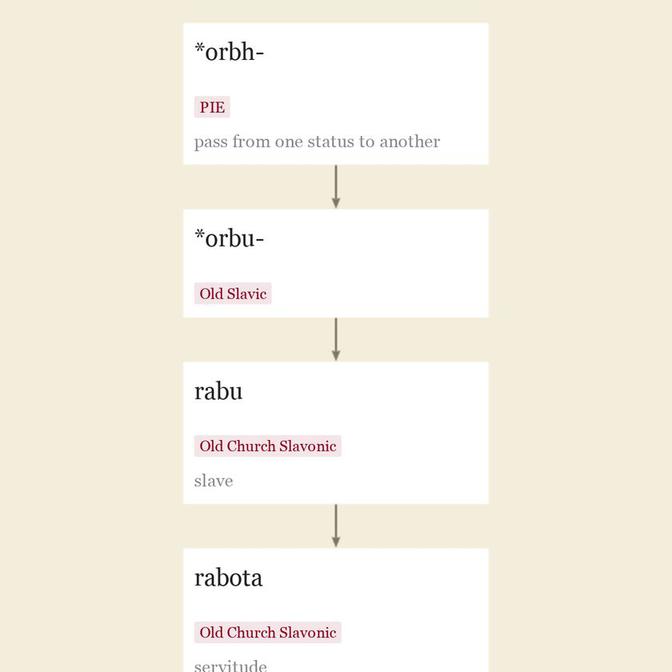 1923, "mechanical person," also "person whose work or activities are entirely mechanical," from the English translation of the 1920 play "R.U.R." ("Rossum's Universal Robots") by Karel Capek (1890-1938), from Czech robotnik "forced worker," from robota "forced labor, compulsory service, drudgery," from robotiti "to work, drudge," from an Old Czech source akin to Old Church Slavonic rabota "servitude," from rabu "slave" (from Old Slavic *orbu-, from PIE *orbh- "pass from one status to another;" see orphan).

The Slavic word thus is a cousin to German Arbeit "work" (Old High German arabeit). The play was enthusiastically received in New York from its Theatre Guild performance debut on Oct. 9, 1922. According to Rawson the word was popularized by Karel Capek's play, "but was coined by his brother Josef (the two often collaborated), who used it initially in a short story." Hence, "a human-like machine designed to carry out tasks like a human agent."

"Young Rossum invented a worker with the minimum amount of requirements. He had to simplify him. He rejected everything that did not contribute directly to the progress of work—everything that makes man more expensive. In fact, he rejected man and made the Robot. My dear Miss Glory, the Robots are not people. Mechanically they are more perfect than we are, they have an enormously developed intelligence, but they have no soul."  ["R.U.R."]