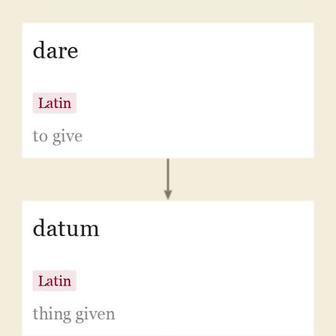 1640s, "a fact given or granted," classical plural of datum, from Latin datum "(thing) given," neuter past participle of dare "to give" (from PIE root *do- "to give"). In classical use originally "a fact given as the basis for calculation in mathematical problems." From 1897 as "numerical facts collected for future reference."

Meaning "transmittable and storable information by which computer operations are performed" is first recorded 1946. Data-processing is from 1954; data-base (also database) "structured collection of data in a computer" is by 1962; data-entry is by 1970.

From late 14c. as "the part of a writing or inscription which specifies when it was done." The sense transfer from "given" to "time" is via the Roman convention of closing every article of correspondence by writing "given" and the day and month — meaning perhaps "given to messenger" — which led to data becoming a term for "the time (and place) stated." A Roman letter would include something along the lines of datum Romae pridie Kalendas Maias — "given at Rome on the last day of April."

"small cube marked on each face with spots numbering from one to six, used in gaming," early 14c. (as a plural, late 14c. as a singular), from Old French de "die, dice," which is of uncertain origin. Common Romanic (cognates: Spanish, Portuguese, Italian dado, Provençal dat, Catalan dau), perhaps from Latin datum "given," past participle of dare "to give" (from PIE root *do- "to give"), which, in addition to "give," had a secondary sense of "to play" (as a chess piece); or else the notion is "what is given" (by chance or Fortune).

The numbers on the opposite sides always add up to seven; otherwise there is no uniformity to their arrangement. Sense of "engraved stamping block or tool used for stamping a softer material" is from 1690s. Perhaps so called because they often were used in pairs (to impress on both sides, as of a coin).

Figurative phrase the die is cast "the decisive stem is taken" is from 1630s, in reference to the throw of the dice. The expression translates Latin alea iacta est (or iacta alea est), famously uttered by Caesar when he crossed the Rubicon.